Cruising with Becky, Caviar of the Pacific

Caviar of the Pacific – Balolo, what is it? Well Suki described it as a mass of wriggling, delectable worms that rise en masse to the surface during the third quarter of the moon, once or twice a year. 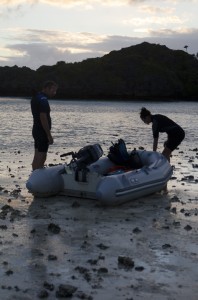 Carlos and Elisabeta from S/V Barca Pulita, the only other cruising boat in Fulaga while we were there,  had experienced this in previous years. They said that the water around their  boat transformed into a sea of writhing, squirming worms. Once I did have internet , I researched this phenomena, and learned that the timing of the spawning is not quite understood but scientists believe it may be associated with rising sea temperatures, moon tides, length of daylight, conditions of the sea and observations of the weather. 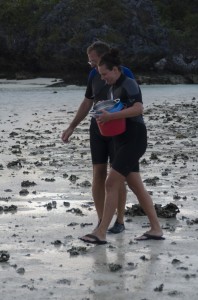 Balolo wasn’t something that Becky was anxious to try but Suki said not to worry he would make a Balolo pizza for Becky in the Lovo!!

As the Balolo would normally rise in the reef but outside the lagoon where we could not navigate with the boat, Ba explained to us where to go with the dinghy. A place called the ‘swimming pool’. We would have to be there just before  sunrise as once the sun was out the Balolo would disintegrate. We set the alarm for four in the morning and got in the dinghy with buckets and containers to catch the Balolo. 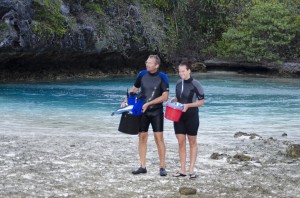 It was a 10 minute dinghy ride and a 10 minute walk. We had our wet suits on but it was still a chilly dinghy ride in the dark. We walked to the swimming pool and waited as the sun rose. But on this third quarter moon there would not be any Balolo rising. It will probably happen on the next third quarter of the moon but unfortunately we will not be here in Fulaga to experience that natural phenomenon. As simple as life is here the complexity of nature is astounding and every day we get to be part of the wonderment or at least learn a little more about it!