Triabunna offered ferry services to Maria Island so it only made sense for us to make that our first stop. Not by ferry but on Landfall. The only way to travel around Maria Island is by walking or by bike (there were some spectacular bike trails). And the only accommodation was tent campsites. Maria Island was a historical convict stations site and operated in the mid 1800’s to punish secondary offenders and runaways. 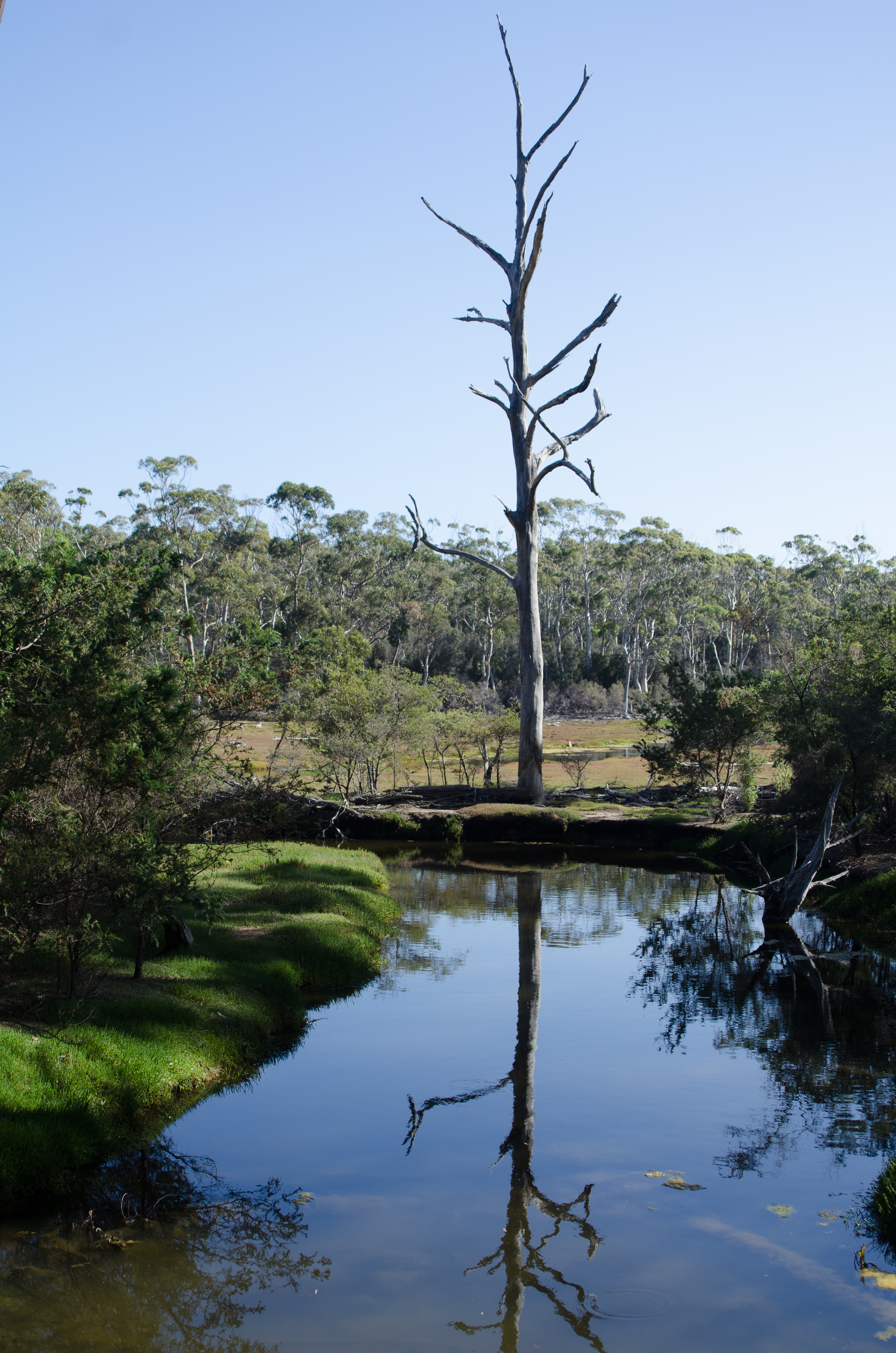 We were learning that much of Australia’s history included tales of crime, punishment, hardship and survival in harsh but beautiful places. There was no getting off this island alive. We anchored in Chinaman’s Bay, quite a distance from the main convict station so we didn’t get to see that but we did walkaround and we were welcomed by many, many Wombats that came out to feed late in the evening. These furry little creatures were more interested in feeding than in running away from us. It appeared to us that there were more Wombats than what food was available. They were everywhere and the grasslands were pretty bare. 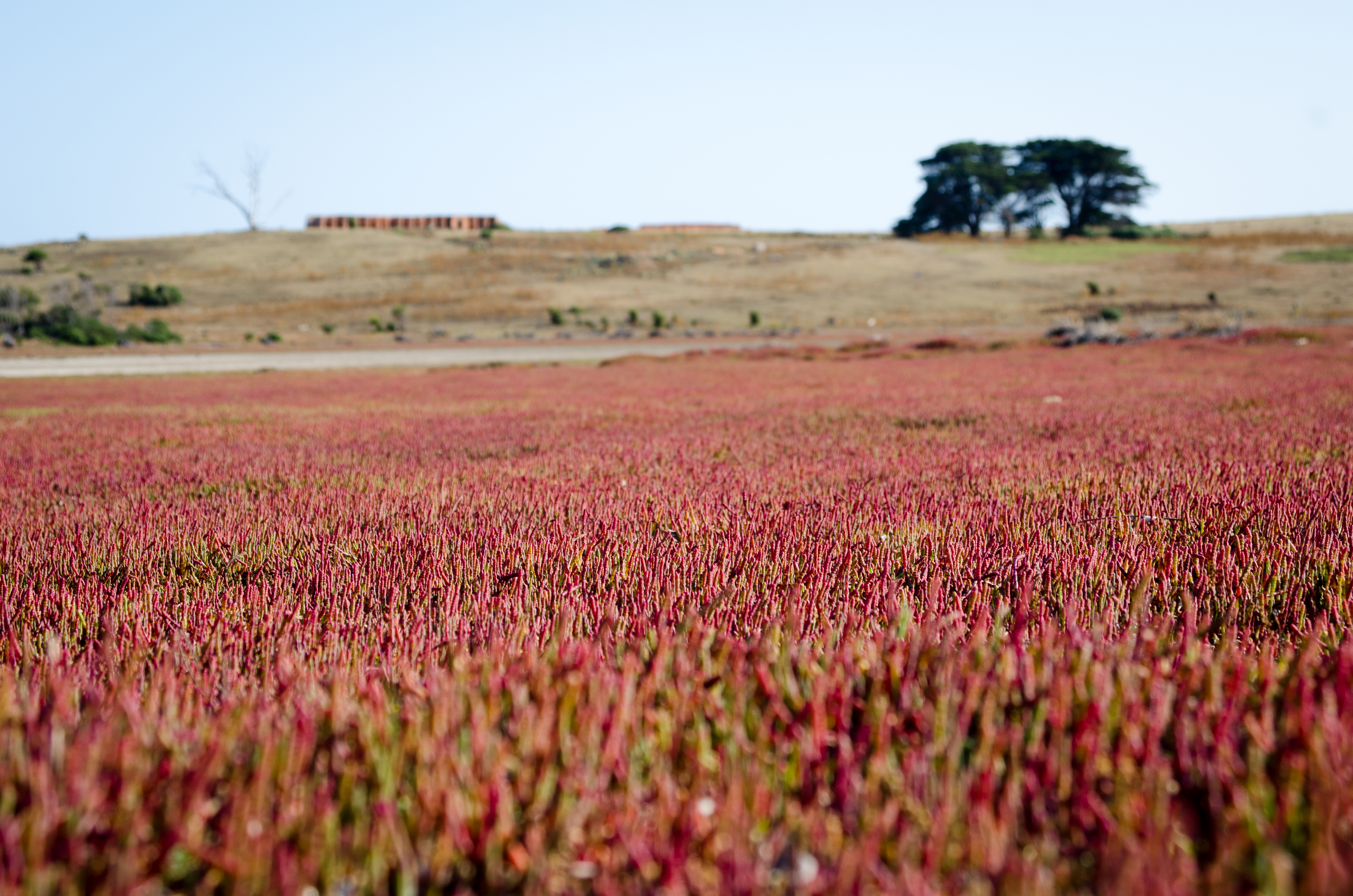 Beautiful salt water vegetation. Site of one of the convict stations 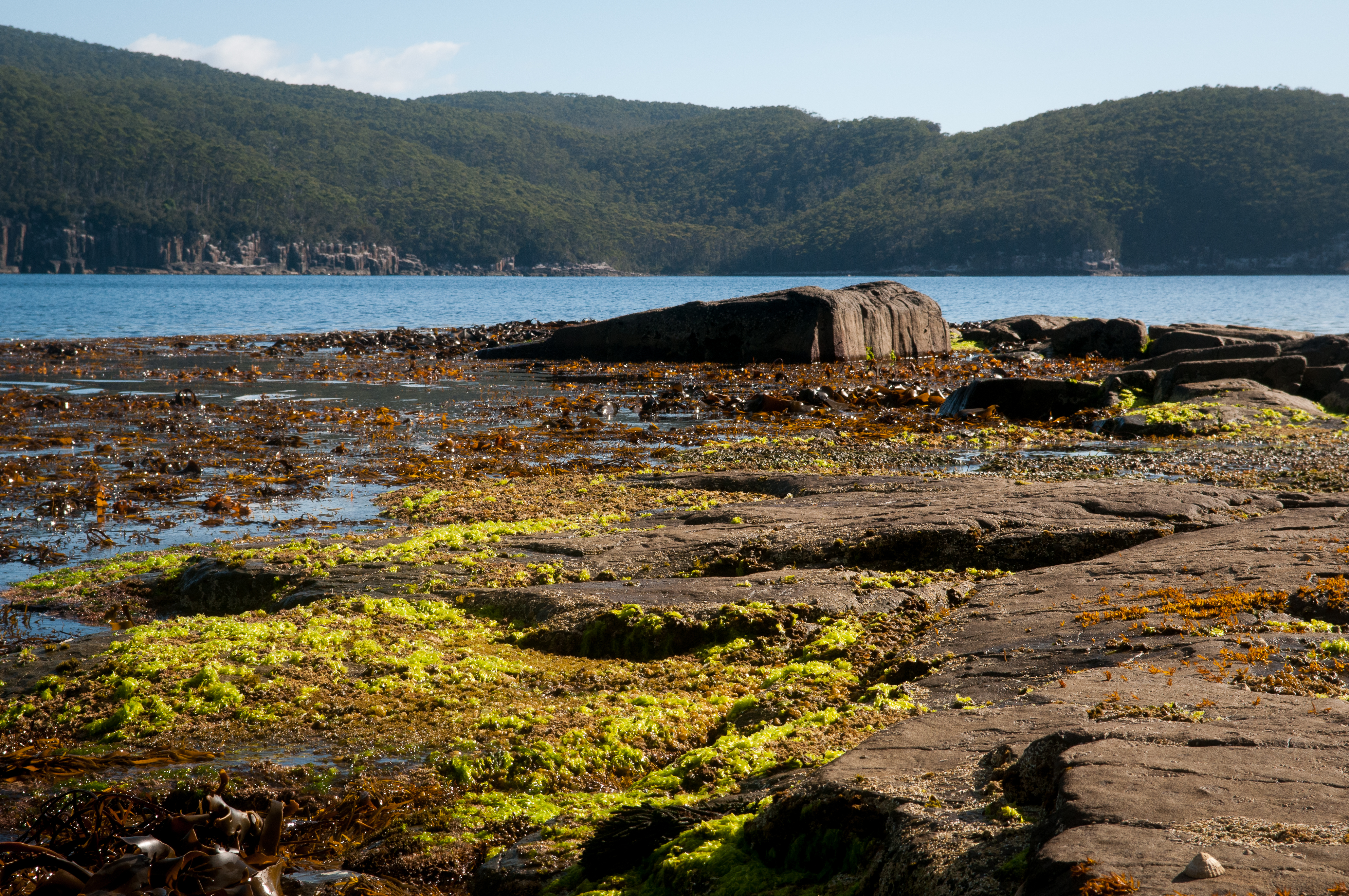 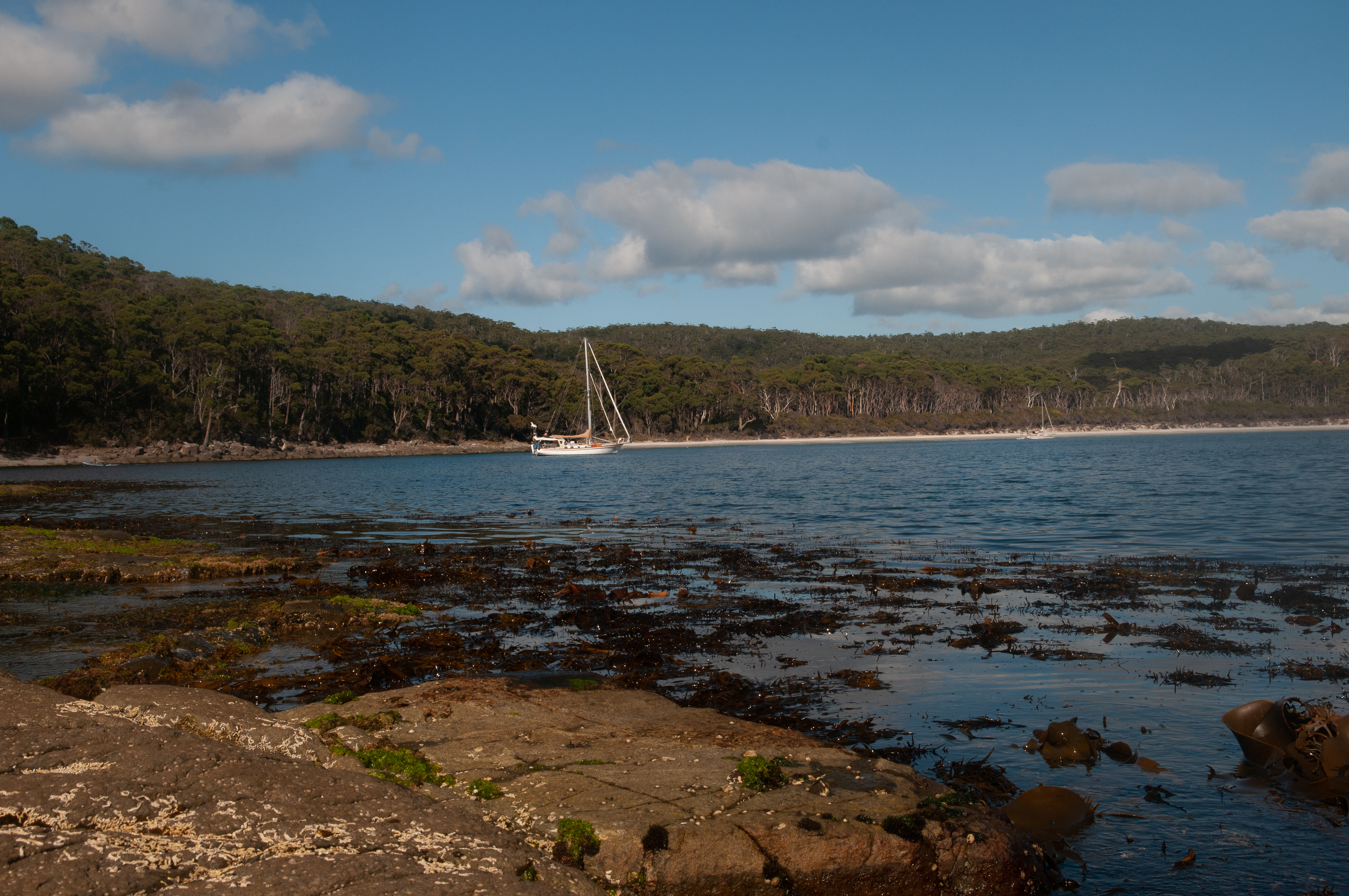 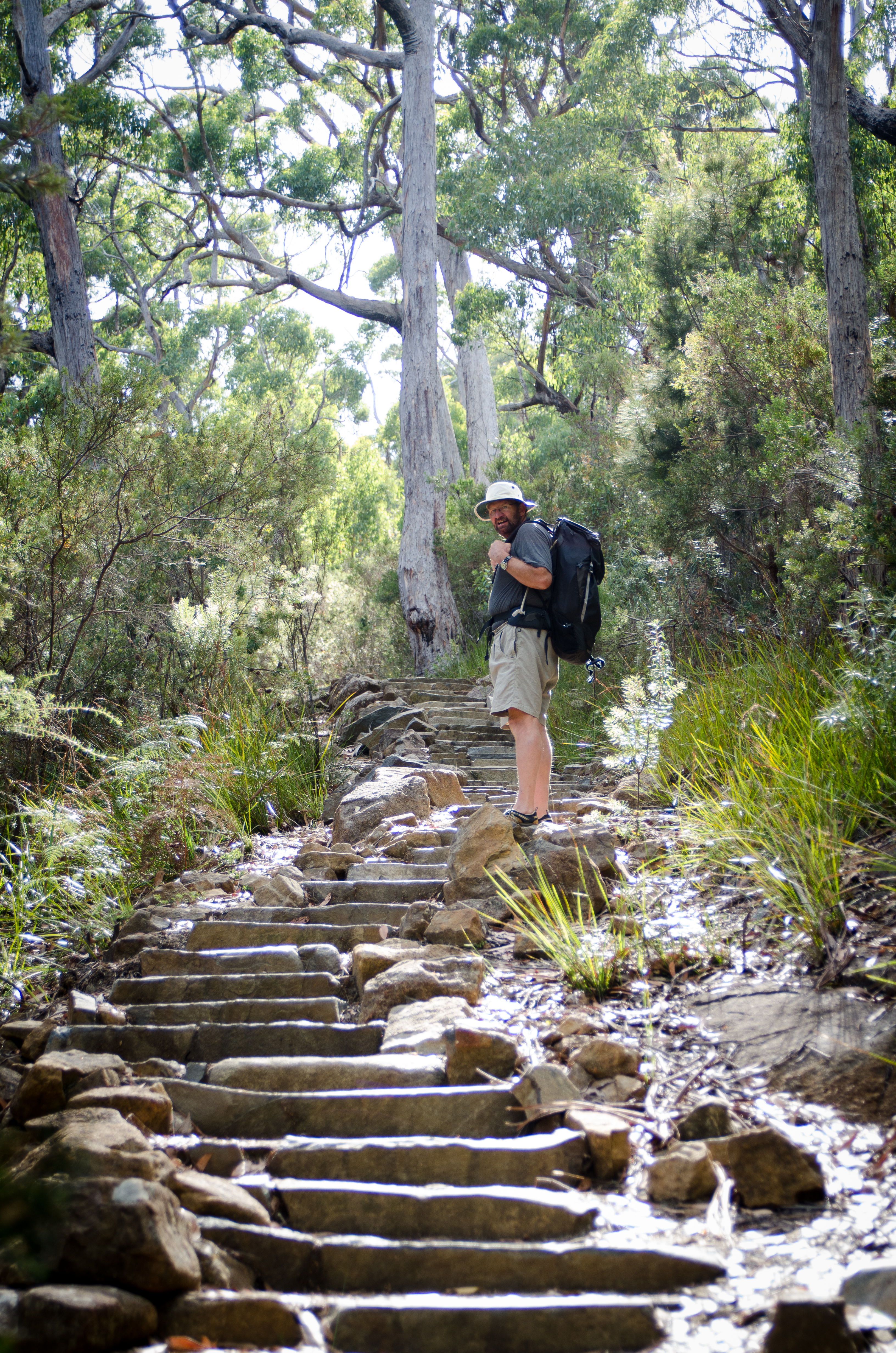 The Cape Hauy track started from the bay campground and while we were there, we had a cool, sunny and calm day so we decided to do the 4-hour return track. The well-maintained track wound itself through a variety of terrain  and onwards to magnificent views of steep cliffs and rock formations. A few young boys with rock climbing gear passed us and we later learned that the “Candlestick” and “Totem Pole” sea stacks were popular areas for climbing and absailing.

We found it a strenuous track and I counted well over 2500 steps but it was worth the spectacular scenery. We were looking forward to a shower at the campsite but by the time we were back the office was closed and we couldn’t buy the necessary tokens. Hot showers would have to wait for maybe the next anchorage. 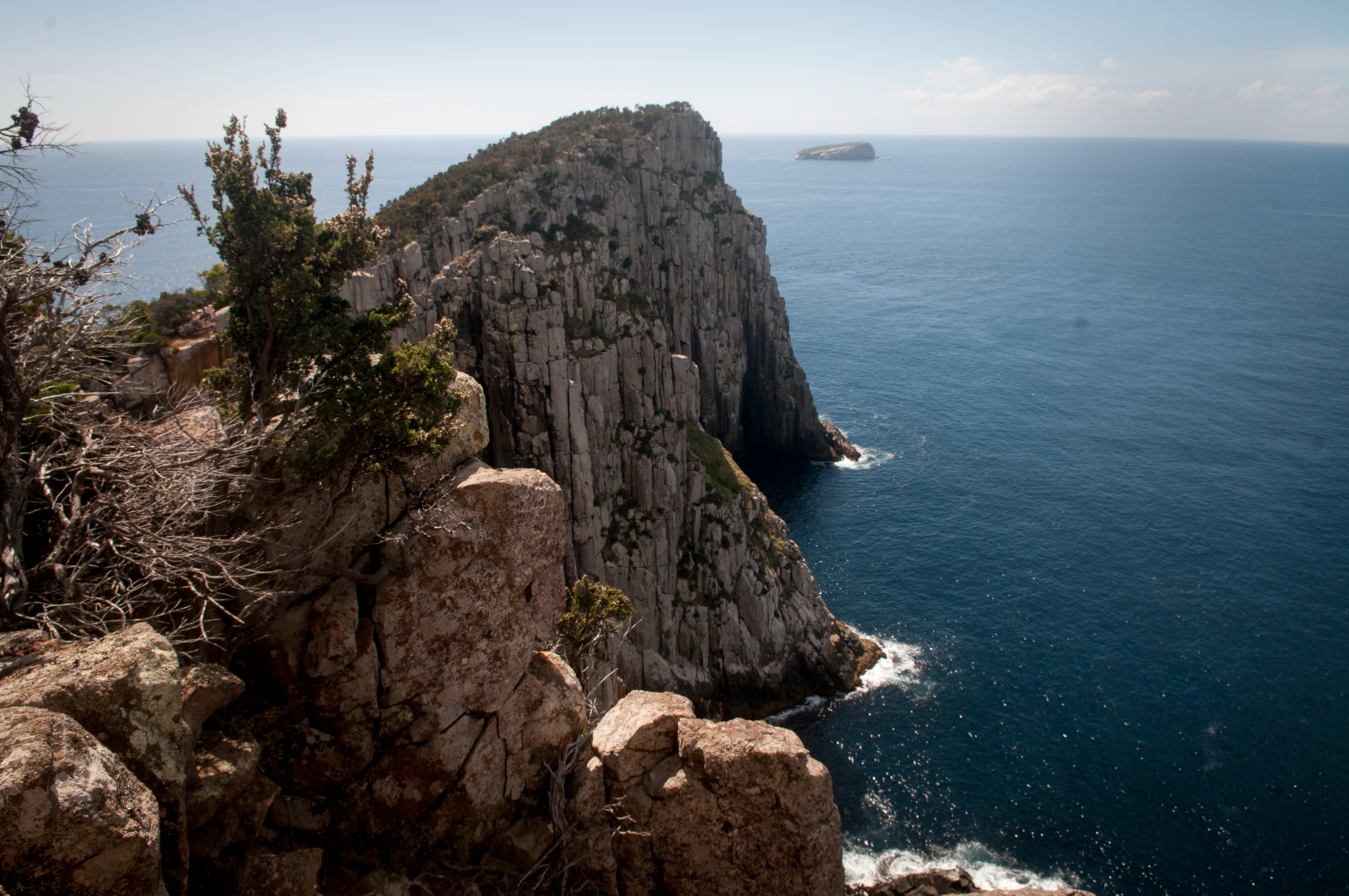 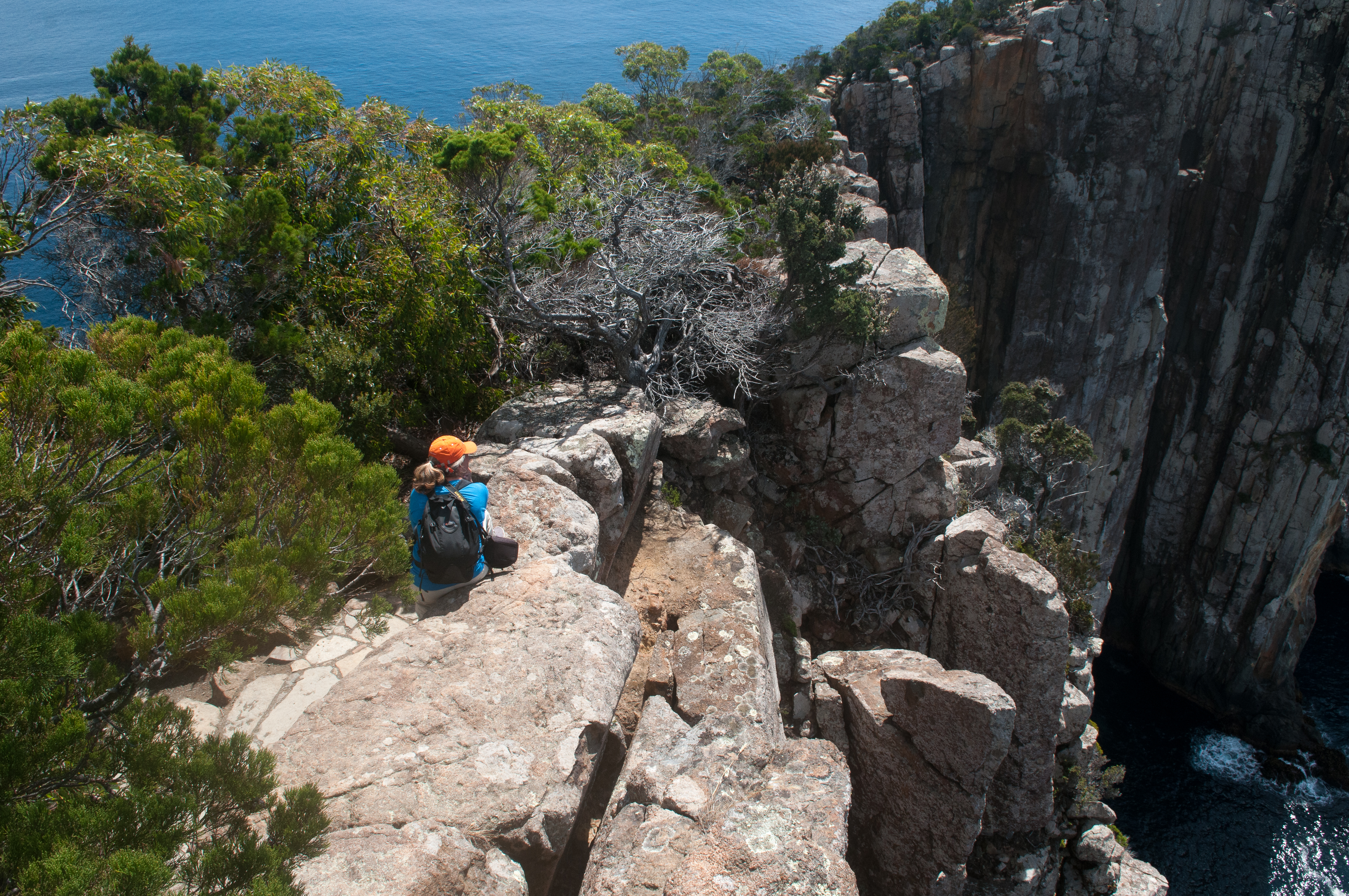 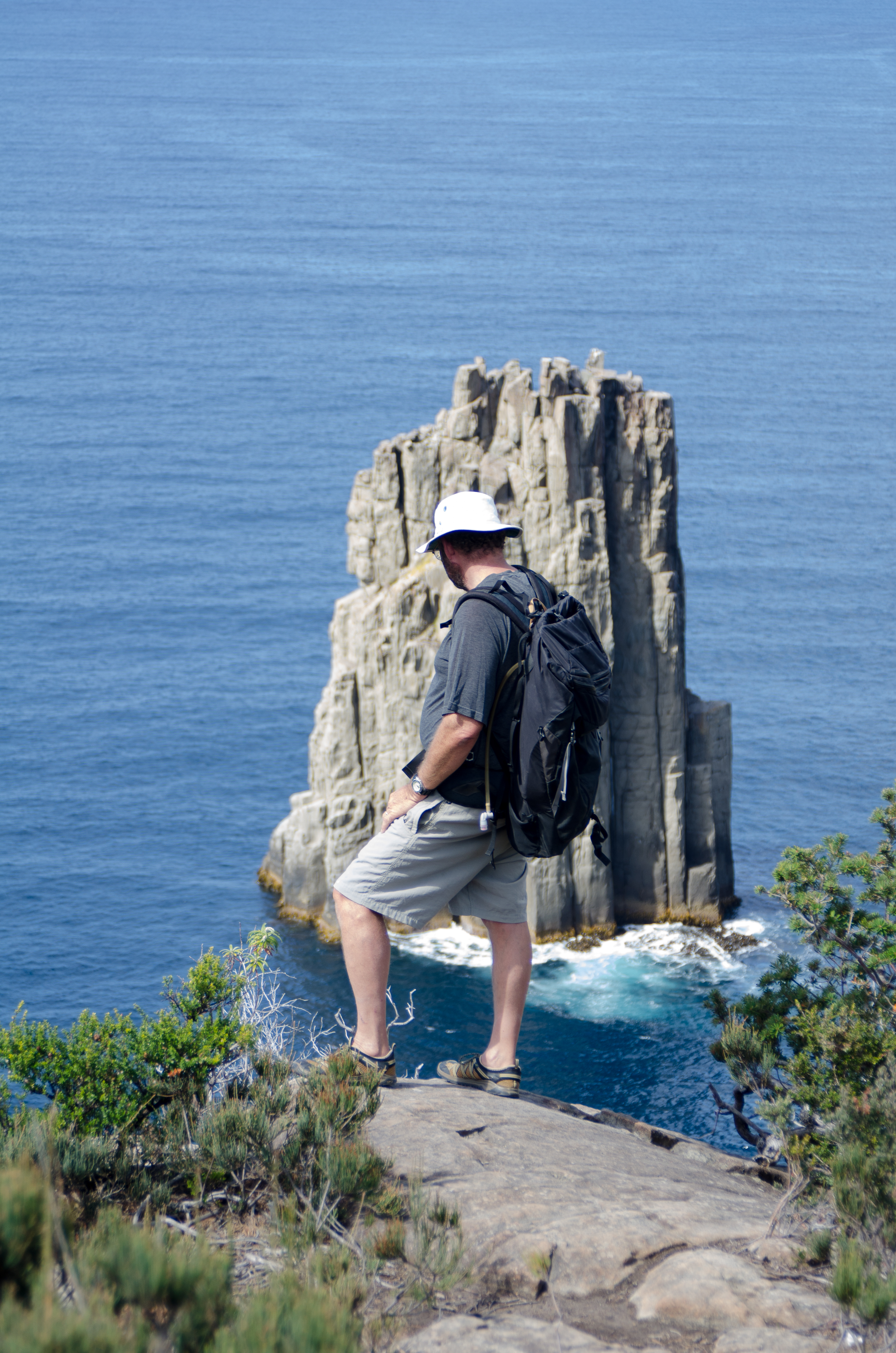 And a long way down too! 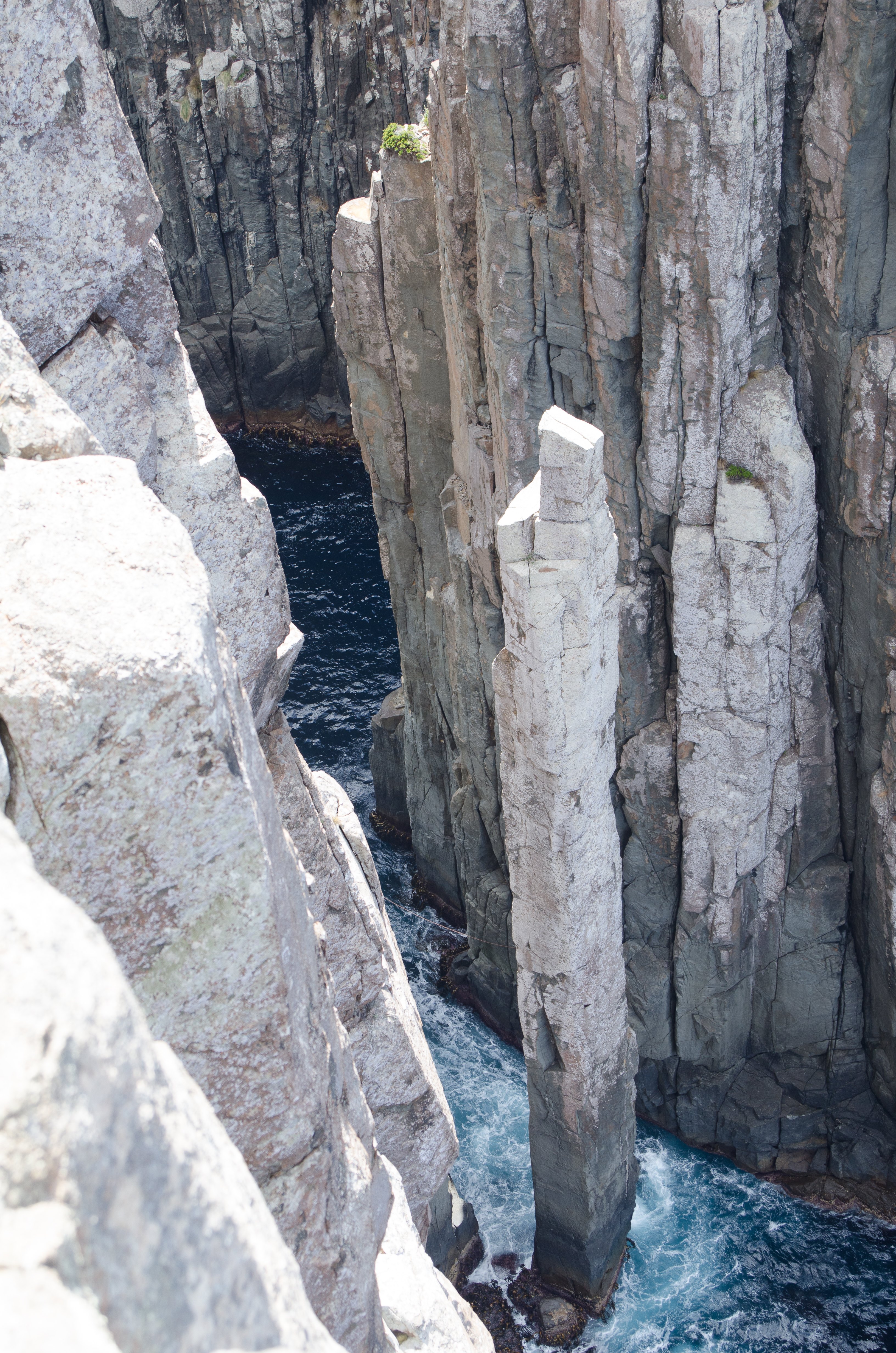 If you look closely you can see the rock climbers line 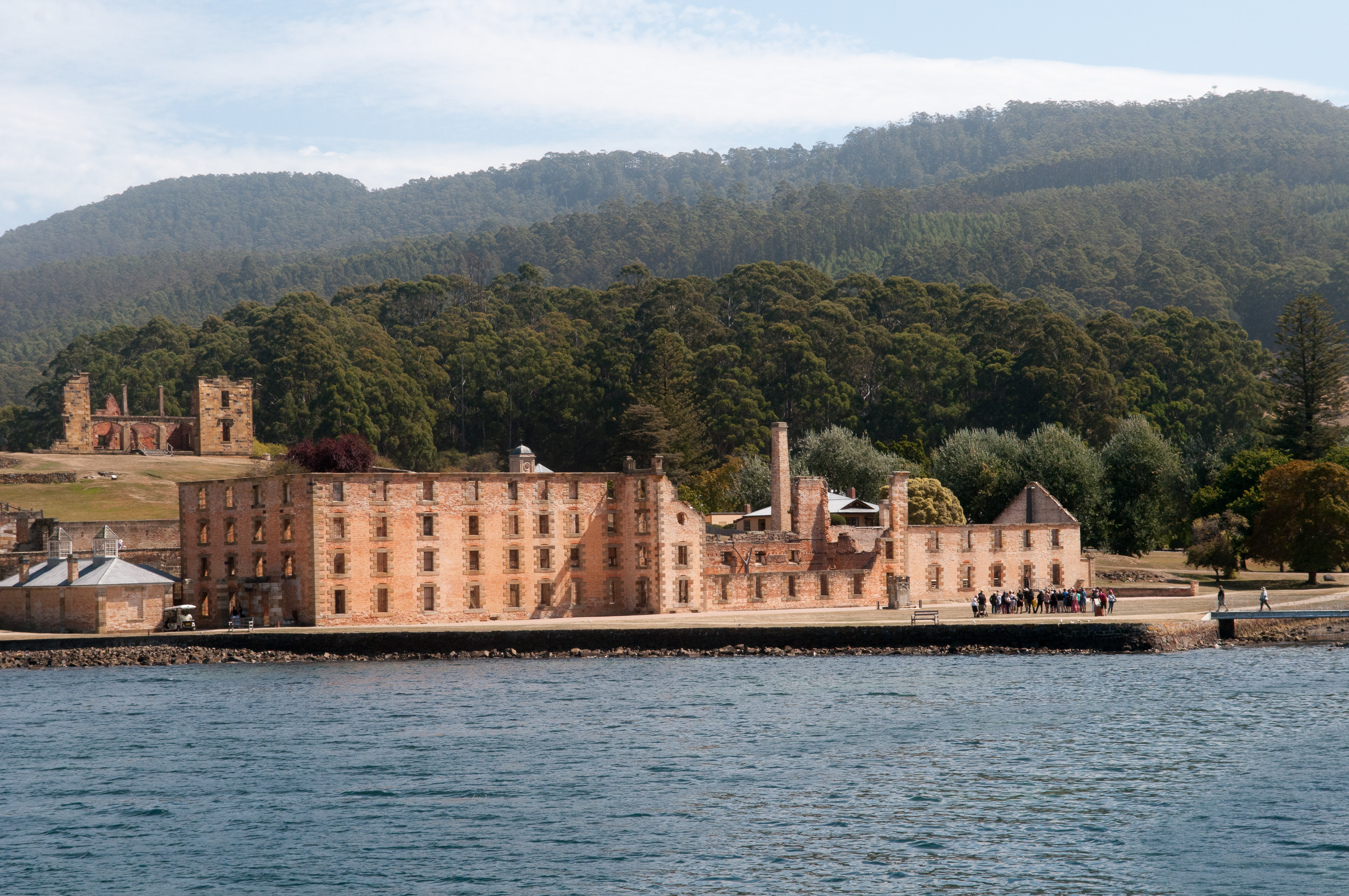 We motored sailed to Port Arthur and grabbed a MAST mooring. These are moorings placed in various locations by Marine and Safety Tasmania and are well maintained. Their website indicates the locations for the moorings and the last time the moorings were inspected. Technically boats are only supposed to be on the moorings for 4 hours but when you are the only boat in the bay it really doesn’t matter how long you use the mooring. 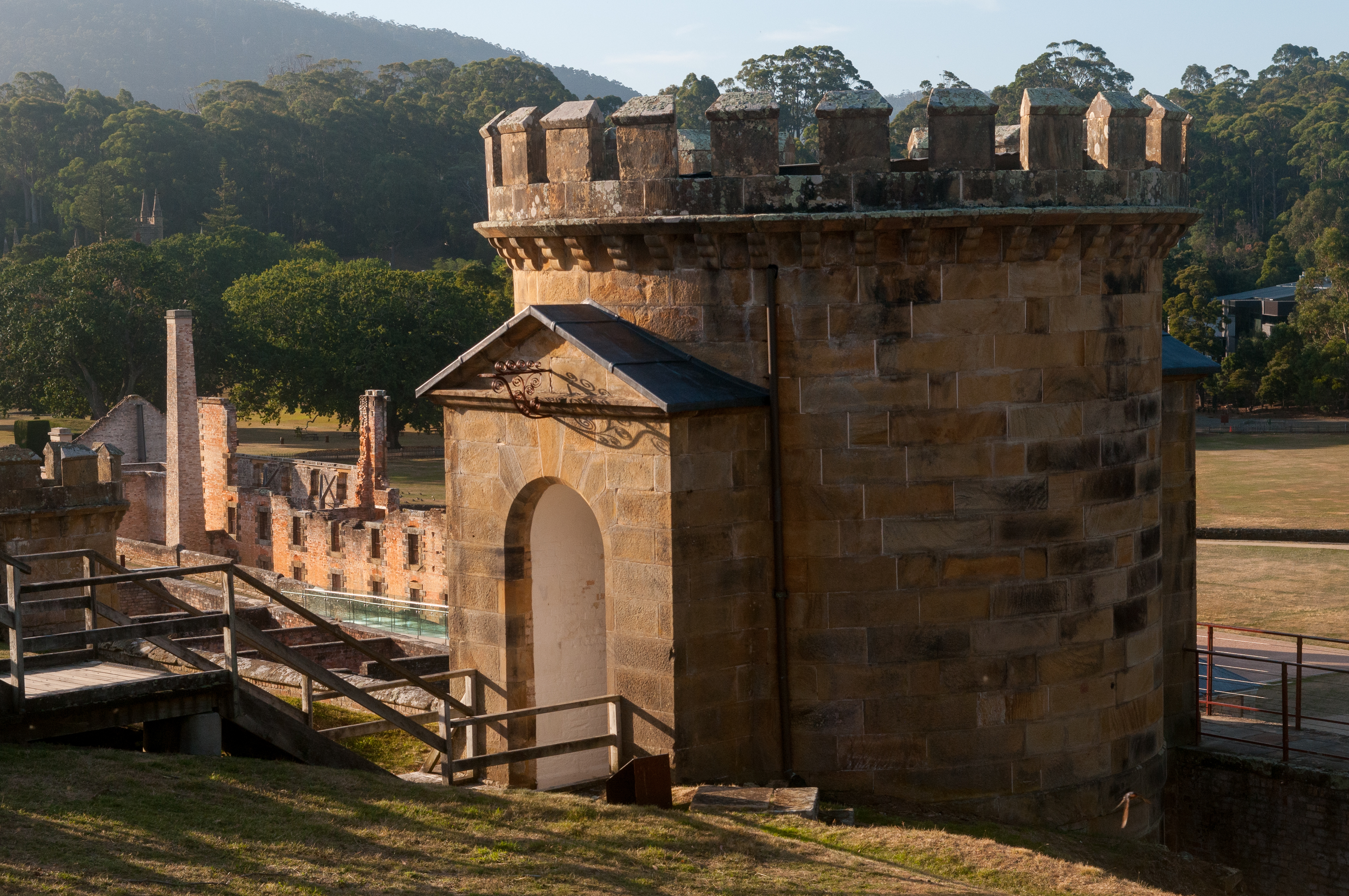 The main reason for anchoring here was to visit historic Port Arthur, a penal settlement. Port Arthur started as a small timber station but it grew to be an important penal location for the colonies. This included convicts from Britain who could no longer be sent to the Americas after the American War of Independence. 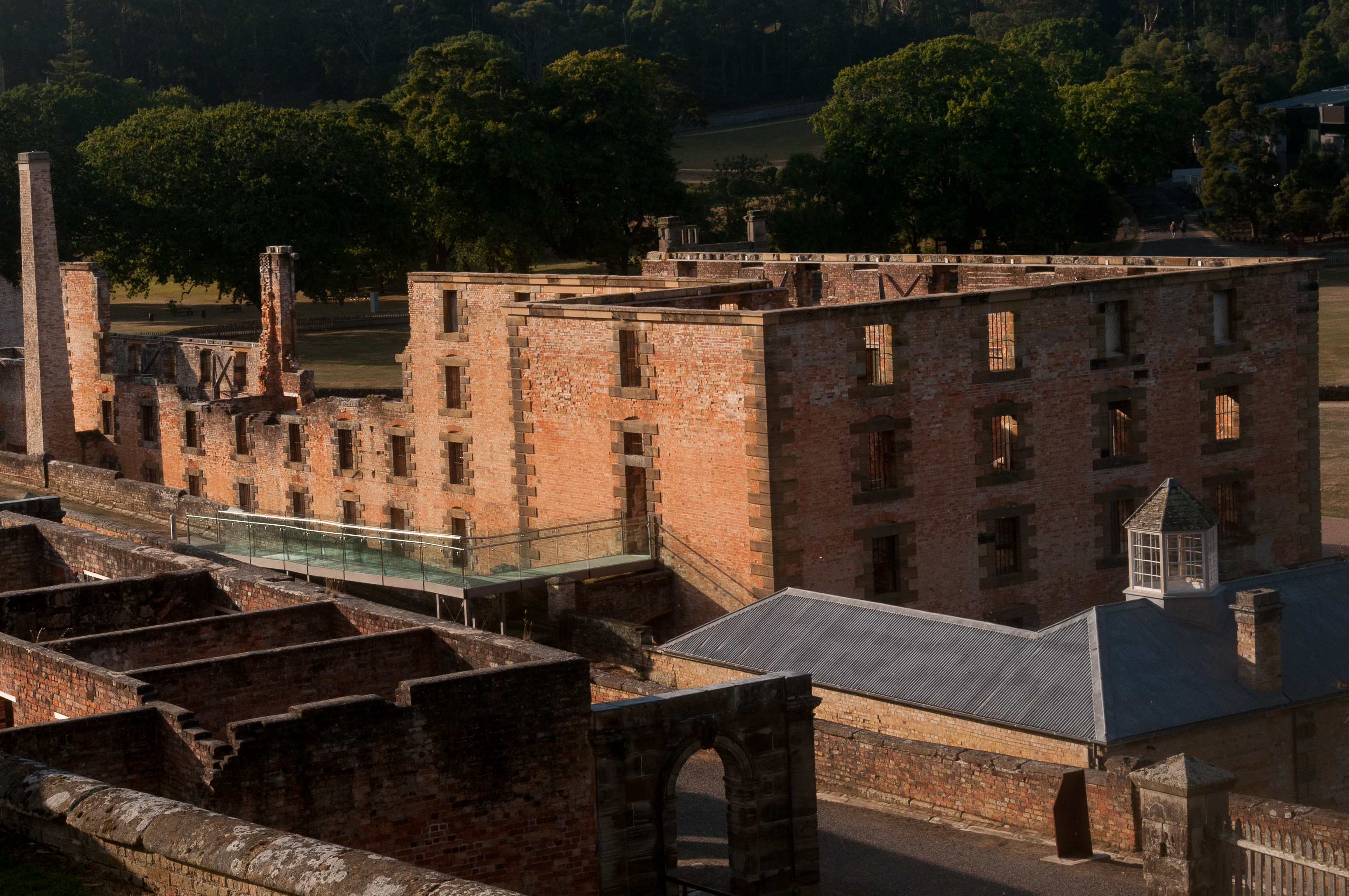 As part of the tour package we got to enjoy a guided walking tour and a one hour boat cruise to Dead Man’s Island (where many of the dead were buried) and to Port Puer (where juvenile convicrts were housed). Port Arthur also had a devastating historical event which took place on April 1996. A young Hobart man armed with a high-powered rifle drove to Port Arthur and went on a shooting rampage killing 35 people and injuring 37 other people. The historic site was a story of many people, places and moments. 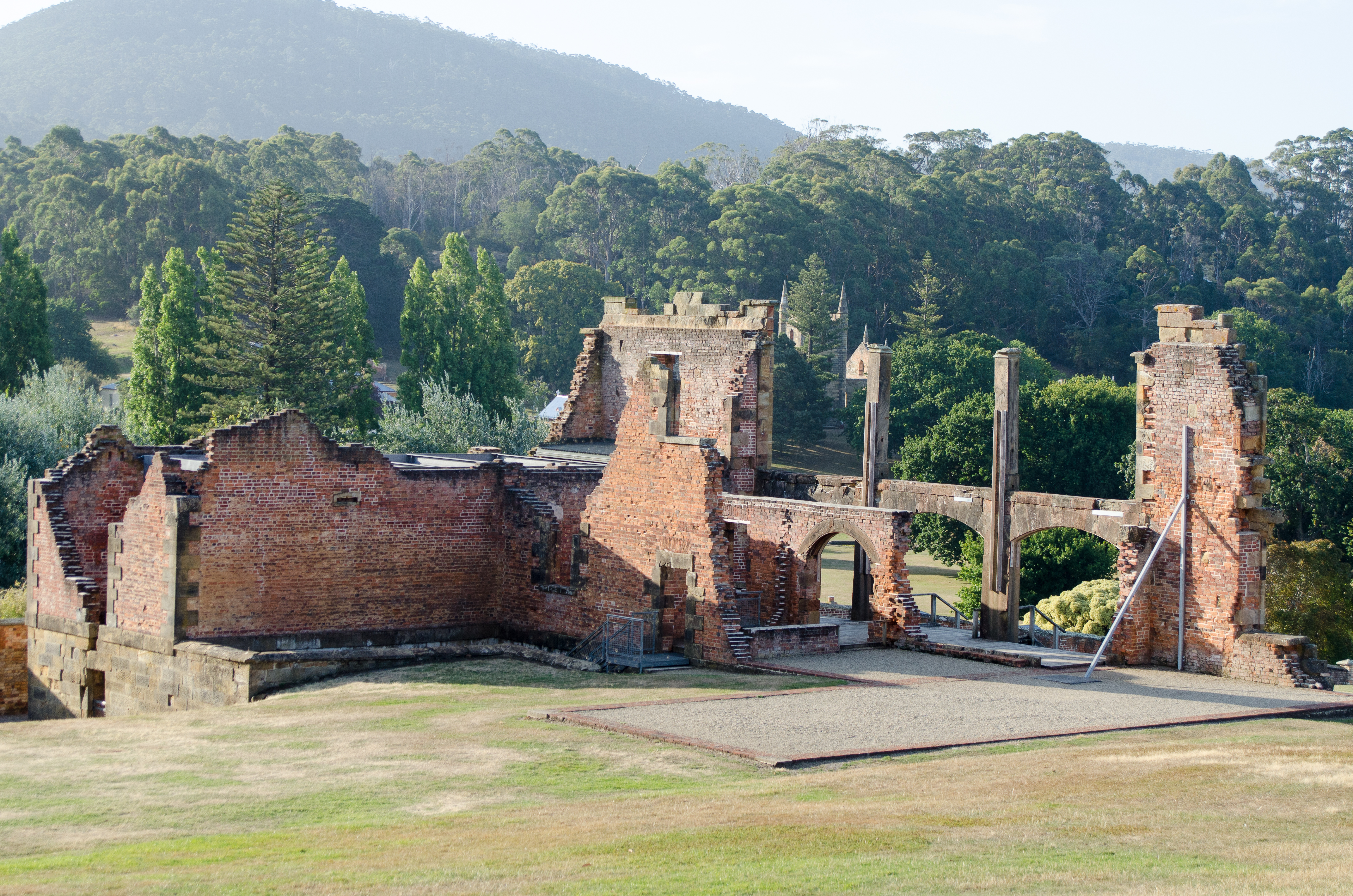 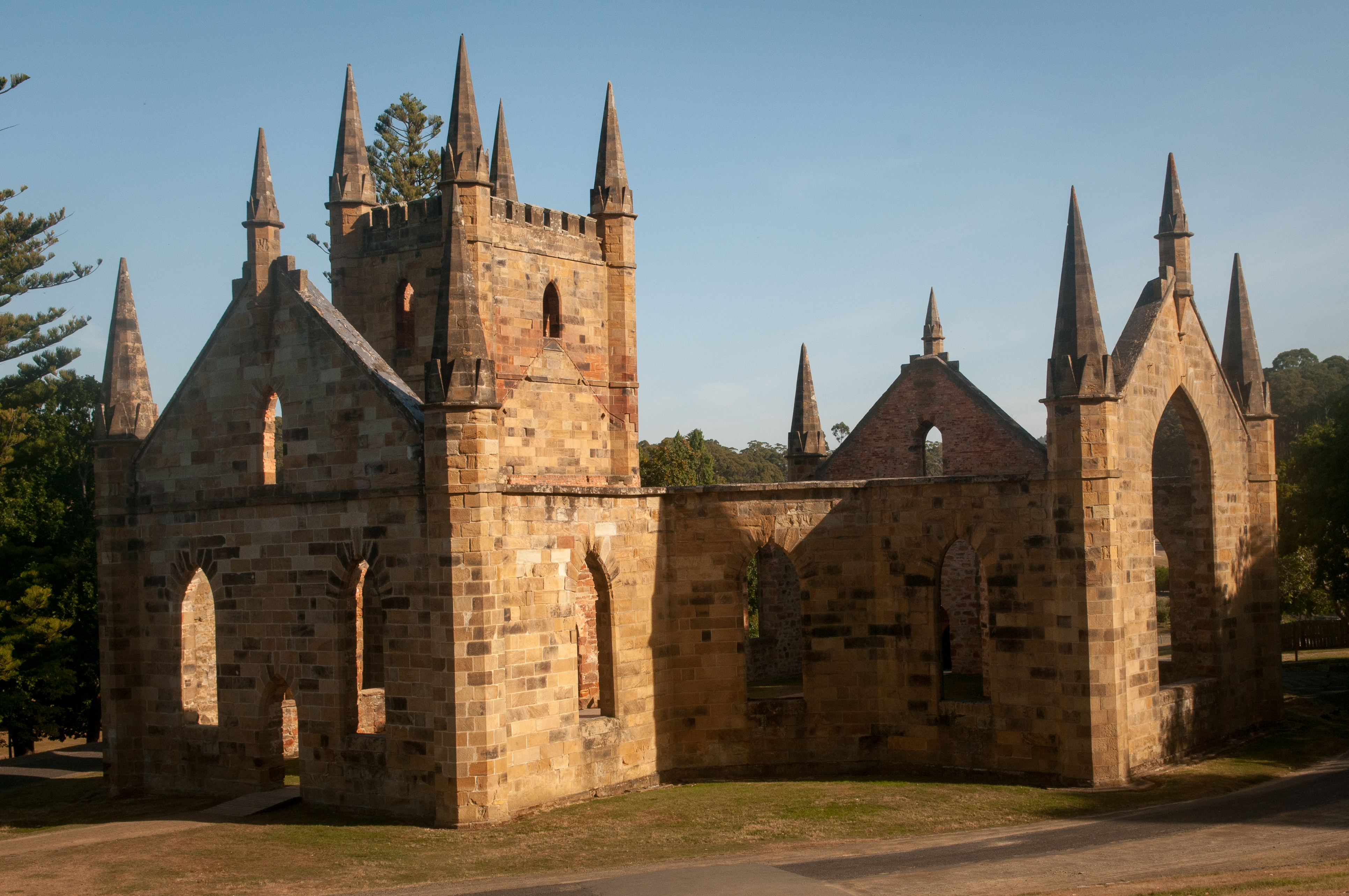 After a couple of nights here we tried to head further South but the wind picked up and it was on the nose so we returned to the bay but anchored in Stewart Bay. A beautiful protected little bay and while we were here we experienced record breaking heat wave of 37C. We didn’t bother to get off the boat just enjoyed a leisurely day while waiting for the winds to come from the North again. 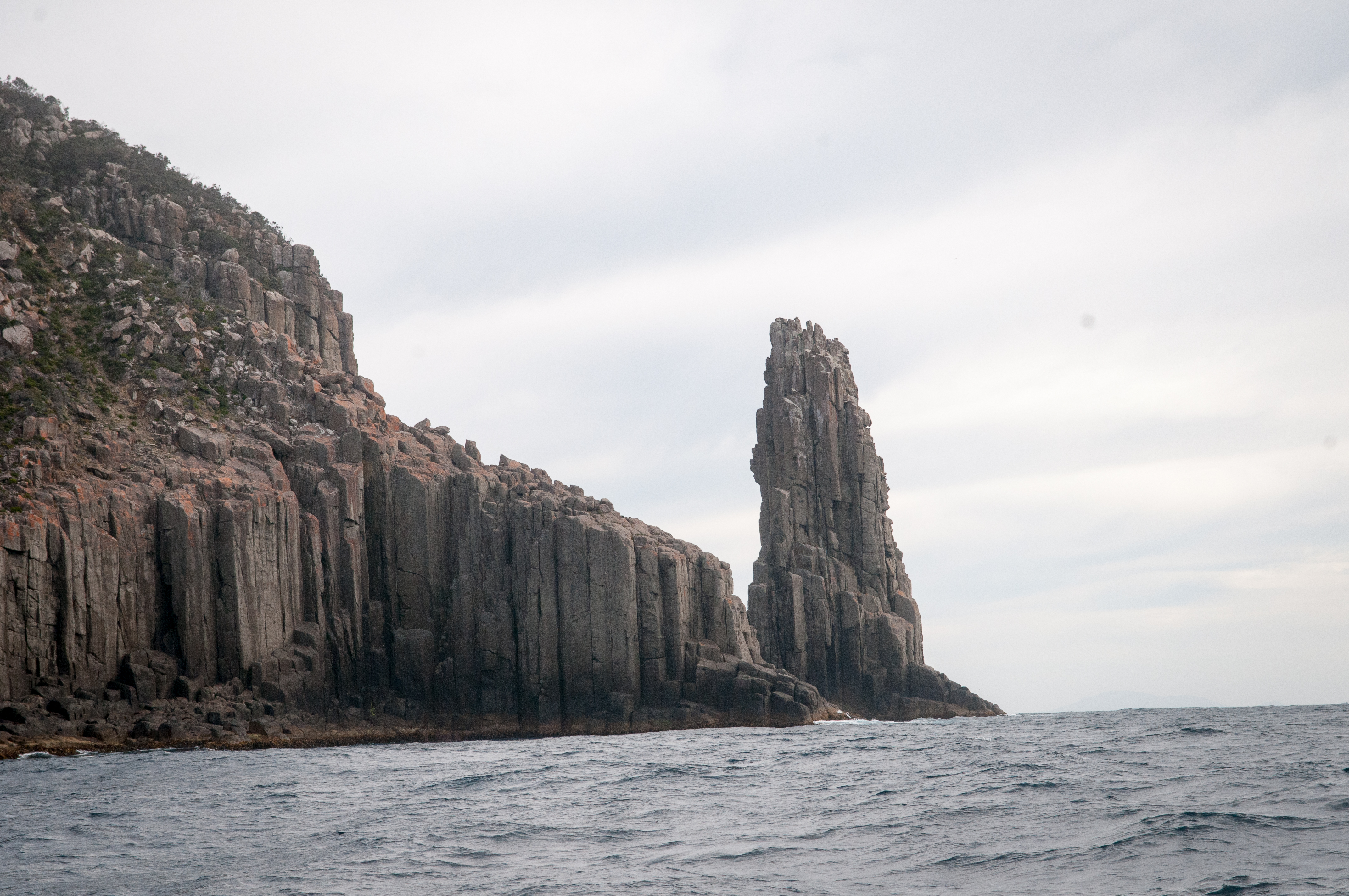 There wasn’t much to see or do in Nubbena, Parsons Bay but our motor sail by Cape Raoul was spectacular. We had some fog and drizzle but not much wind so we could stay close to shore. There is a very popular Three Capes track which takes several days and it’s 48km of breathtakingly beautiful coastline. We experienced Tasmania’s magnificent coast sitting in our cockpit.

It was calm enough that we were even able to motor between Tasman Island and Cape Pillar. I found it to be a little nerving and daunting as I watched the depths go from +100 feet to less than 25 feet and towering rock cliffs on both sides of the boat. Leave it to Denny to even attempt such a feat, nerves of steel! 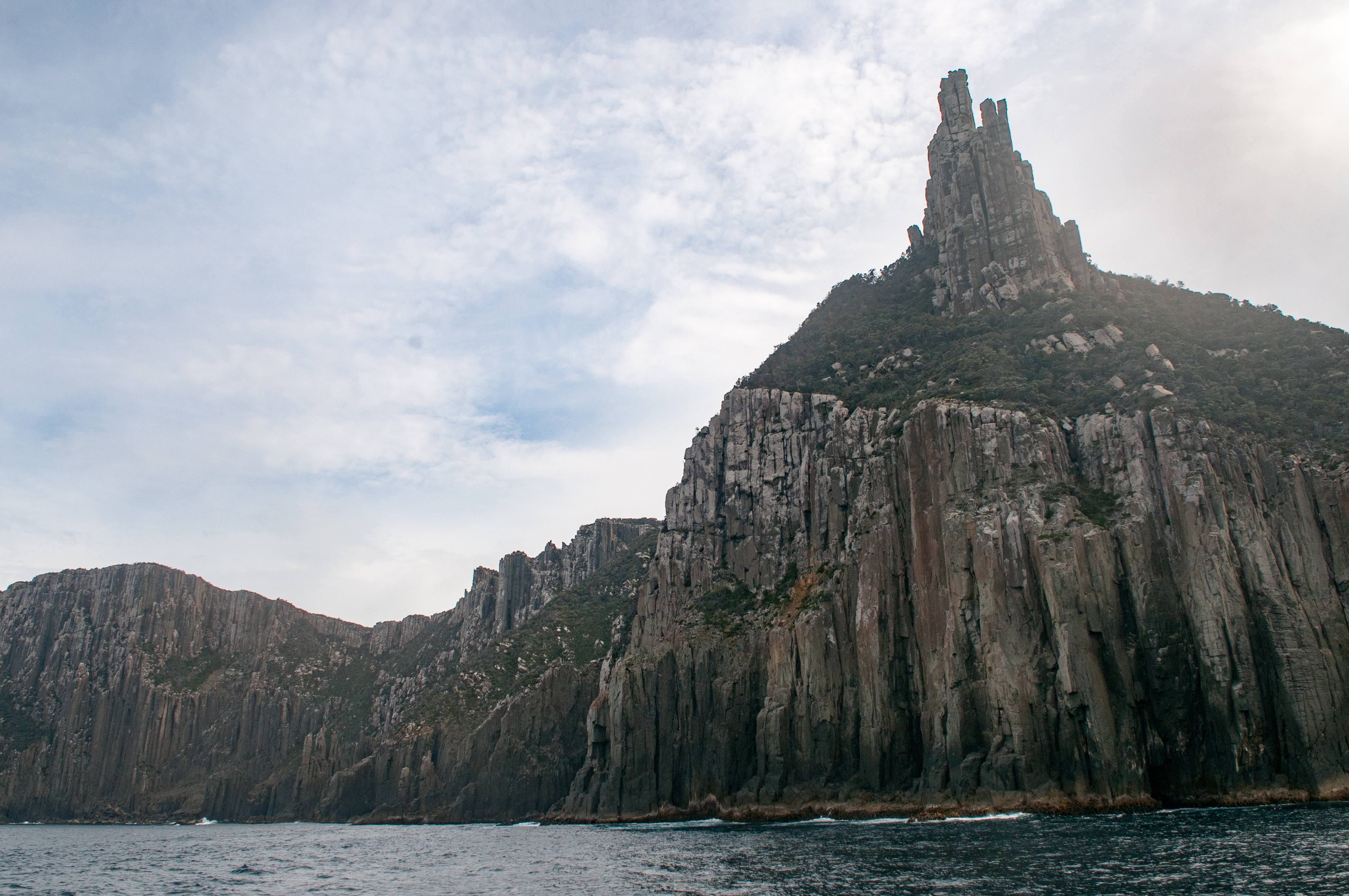 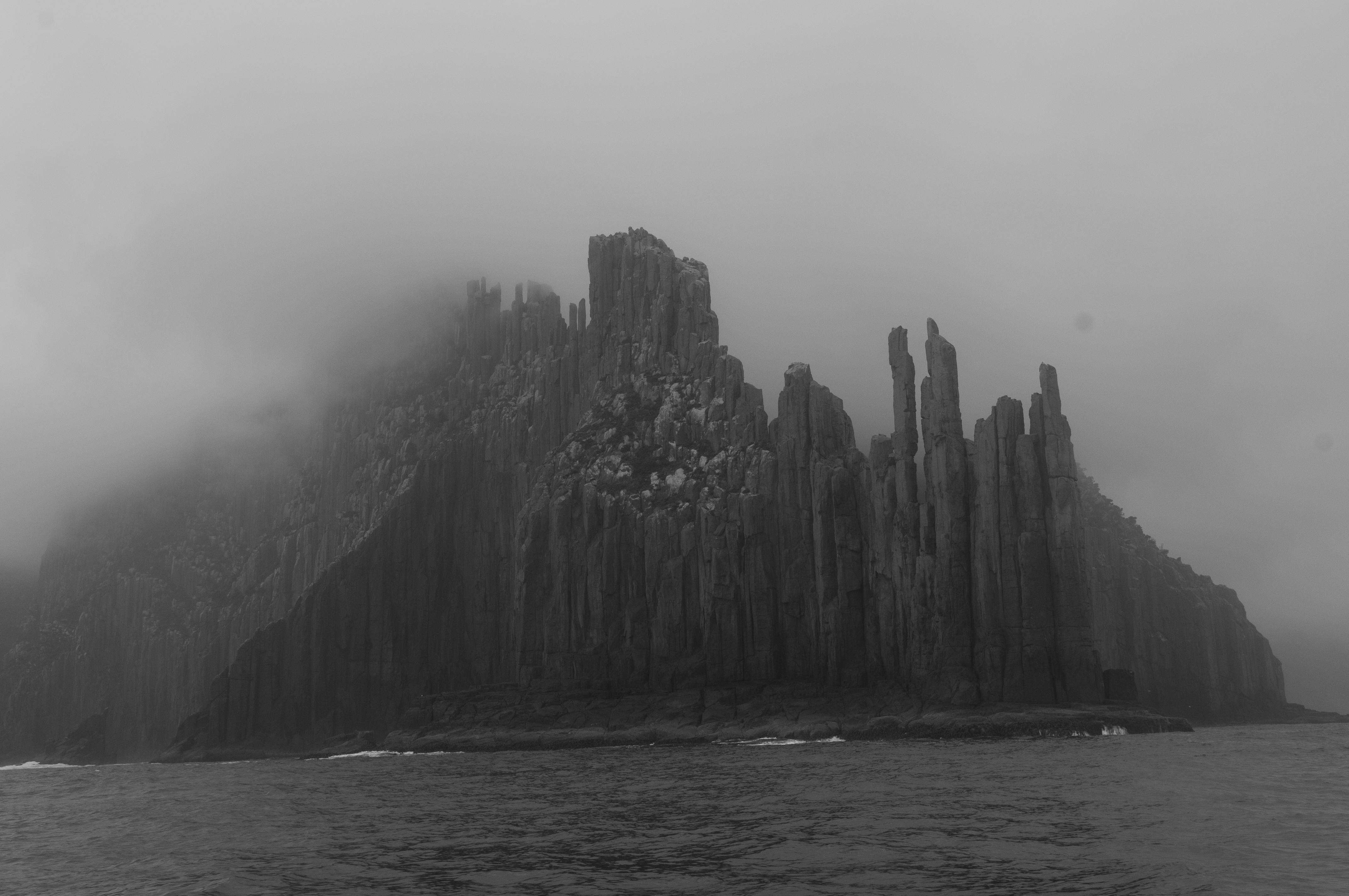