2018 Cruising with Bob in New Caledonia and Australia

Bob arrived in Noumea after over  two days of flights originally leaving from Minneapolis. He was sitting at the marina restaurant with his bags patiently waiting for us while we walked the waterfront looking for him. Not sure how long we kept missing each other but we finally made the connection. It took several trips with the dingy to fairy Bob and all his bags out to the boat, maneuvering through some choppy seas trying hard not to get Bob and all his debris wet.  But that wasn’t to be and he got his first experience of wet salty clothes and life on Landfall.  It was like Christmas onboard as we unpacked all the goodies Santa brought for us including peanuts, candies, salsa and lots of other treats. We spent that night in the rolly Noumea anchorage and then we sailed directly to the island of Mato. 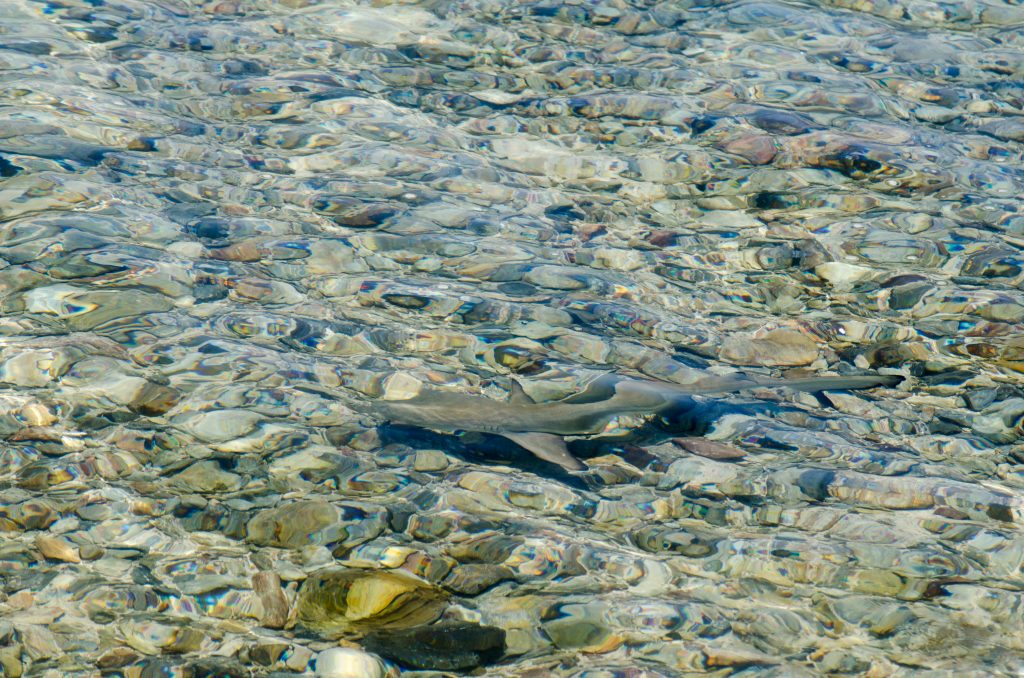 Can you spot the reef shark. We know Bob can!

Mato is a beautiful anchorage among reefs, clear water and plenty of reef sharks. It was impossible to convince Bob to go snorkeling after the shark sighting even if it was only a little reef shark. We did a quick hike to the top of Mato Island and enjoyed a beautiful view of our anchorage.

We spent the night at Mato but had to make a move as the wind was starting to get stronger and this anchorage was only protected by the barrier reef so we were getting the full force of the wind.  Our next anchorage at Ile Ouen was totally different. The water was murky and we were surrounded by red, mountainous terrain.  We explored the shores and after much coaxing managed to get Bob to go for a little snorkel. But it was quick and short. We all saw large grey shark and although they weren’t aggressively hunting they were lurking in close proximity. 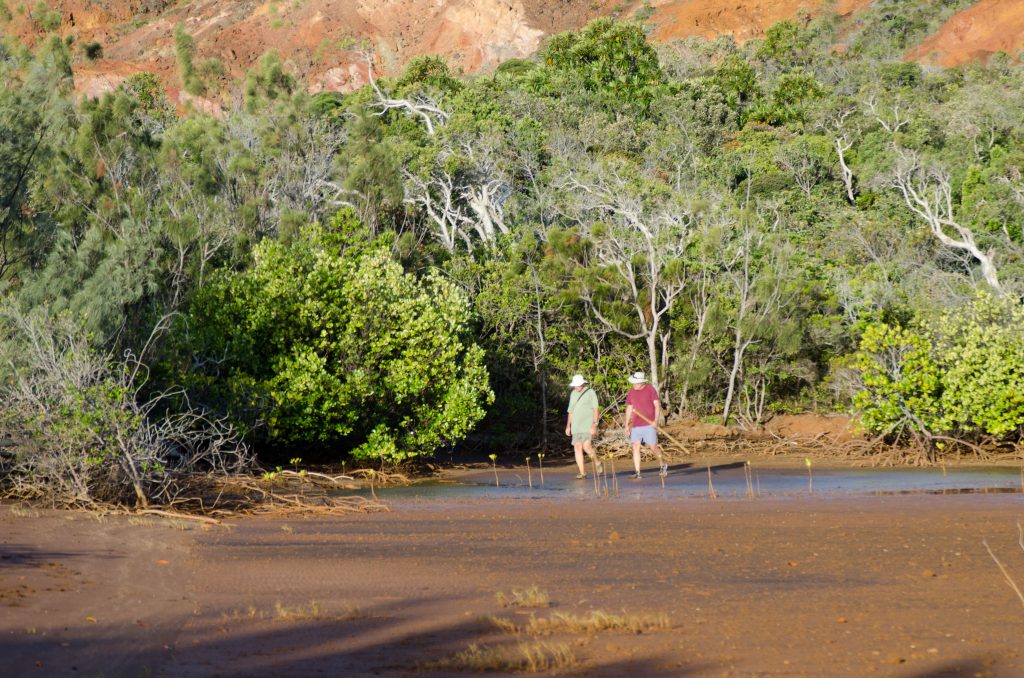 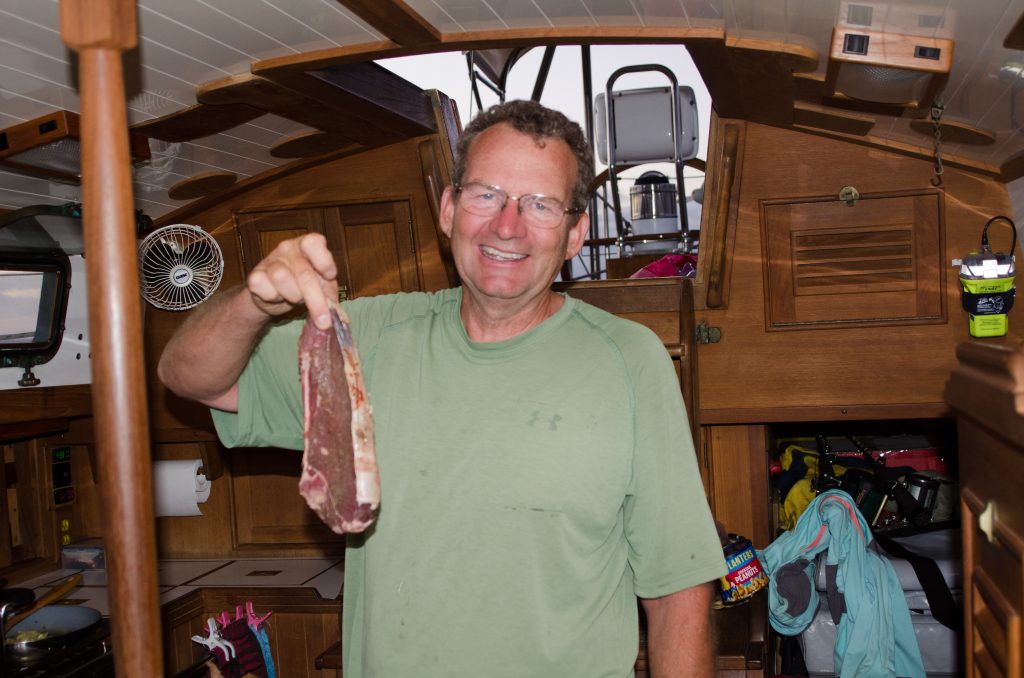 Denny’s birthday was a day away and we were planning to celebrate it with our friends on Atlantis who were waiting in Ile Casy. So we had a great sail and grabbed a mooring close to Atlantis. We had bought humungous steaks and our friends joined us on Landfall. We had such a good time partying and eating Bob’s perfectly barbequed steaks that we didn’t even  think to capture the moment in pictures.

We spent a day exploring the island. There were some great trails which took us all around the island to some nearby wilderness campsites,  the ruins of the resort that used to be there, top of the island where we could see more of the Bay of Prony and found a plaque dedicated to Moose the dog that lived all alone on the Island.  Story has it that the owners of the resort and the dog left the island but the dog not wanting to live anywhere else jumped off the boat and lived on the Island all by himself. He was fed and loved by all visiting cruisers. 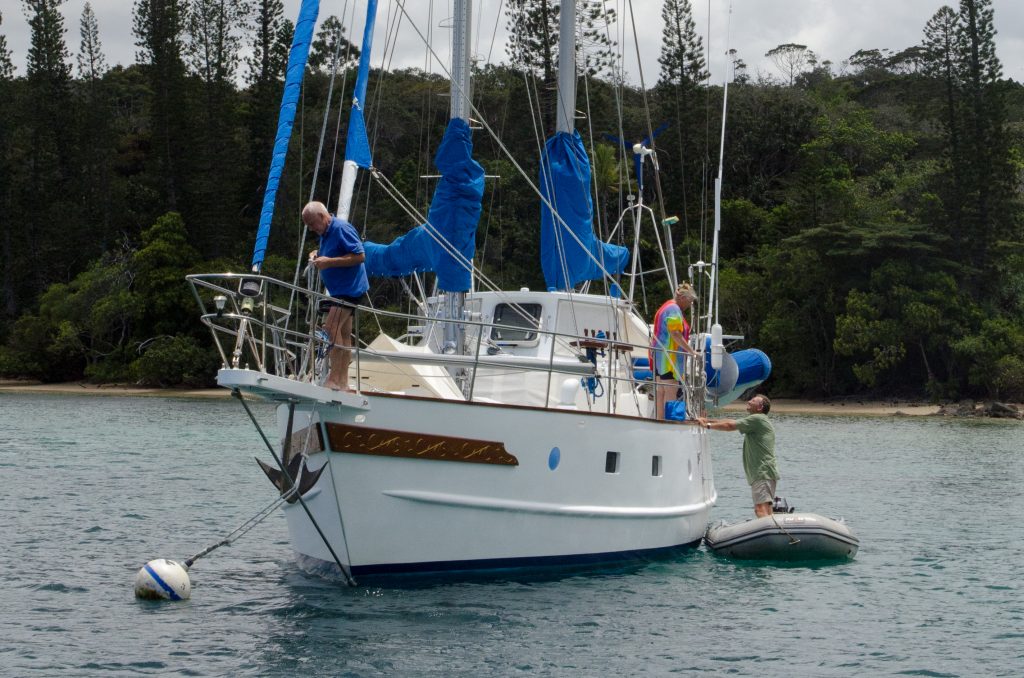 Hello to our friends on Atlantis 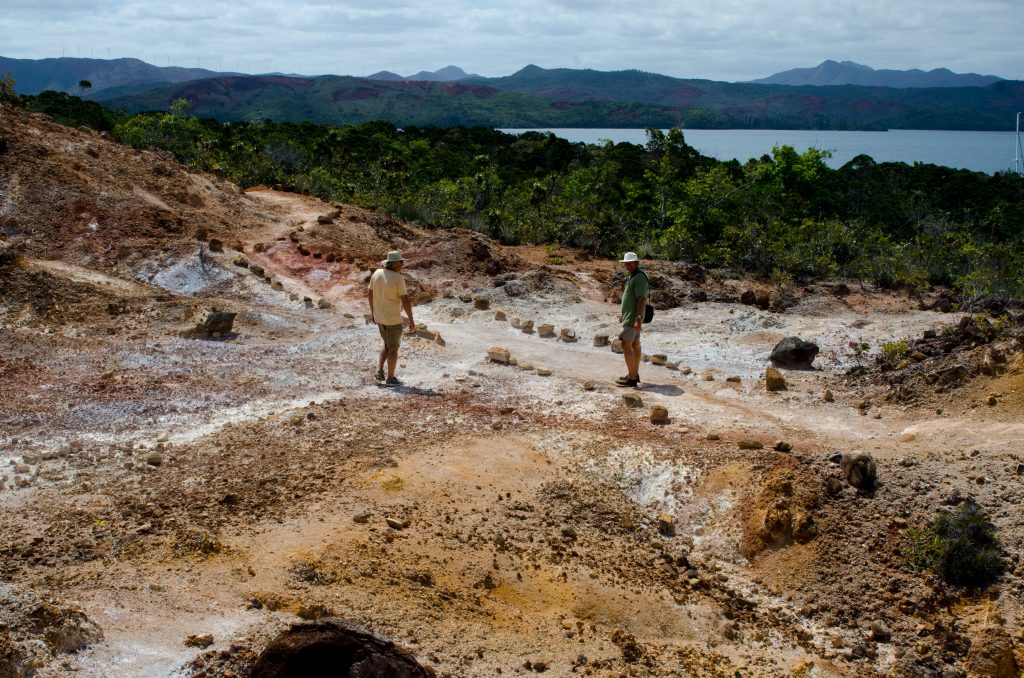 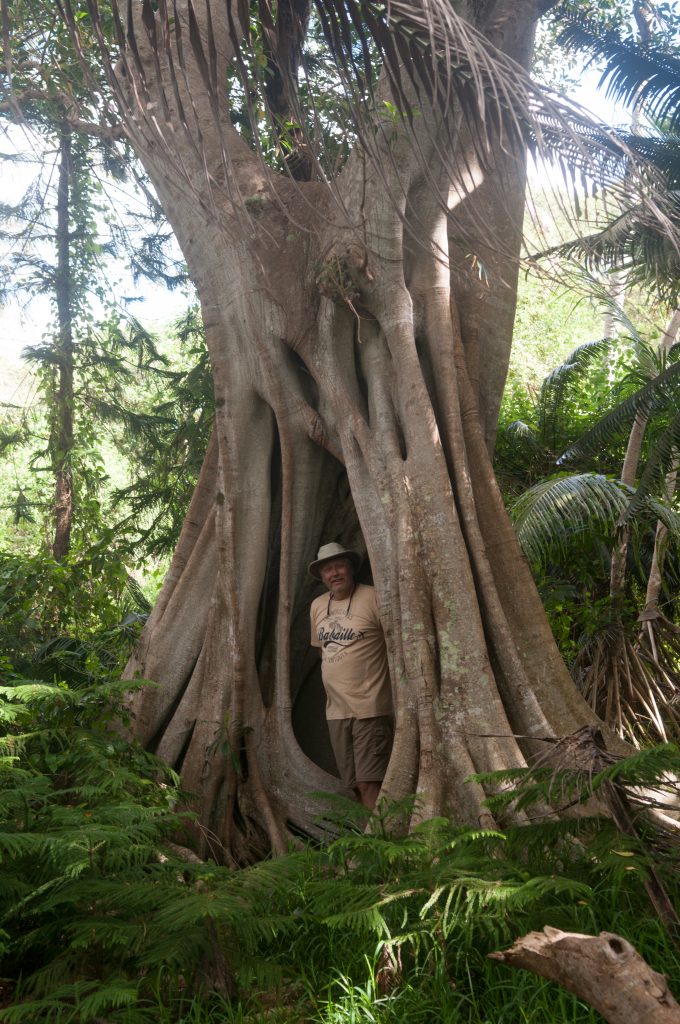 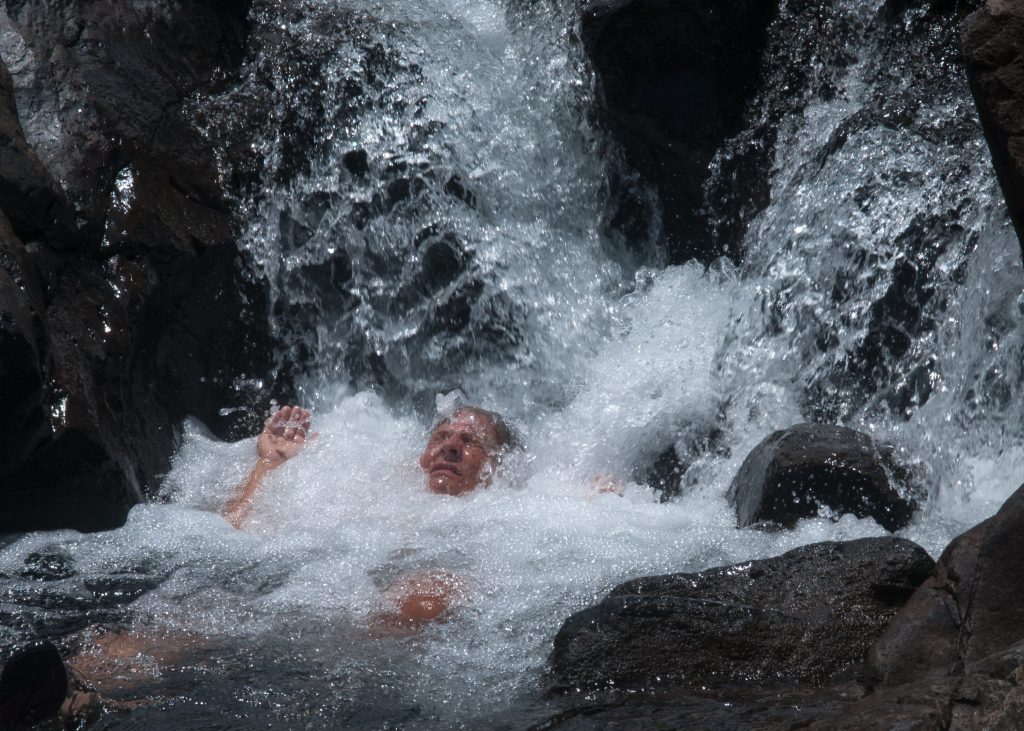 I would rather a hot shower

We wanted to give Bob a good tour of New Caledonia before making our way to Australia so we never stayed more than a couple of days at any anchorage. Next stop Bai Du Caranage for some water play at the cascades and hot pools. Surrounded by all the freshwater it was time for washing clothes and showers.

Never imagined ever having to hand wash clothes 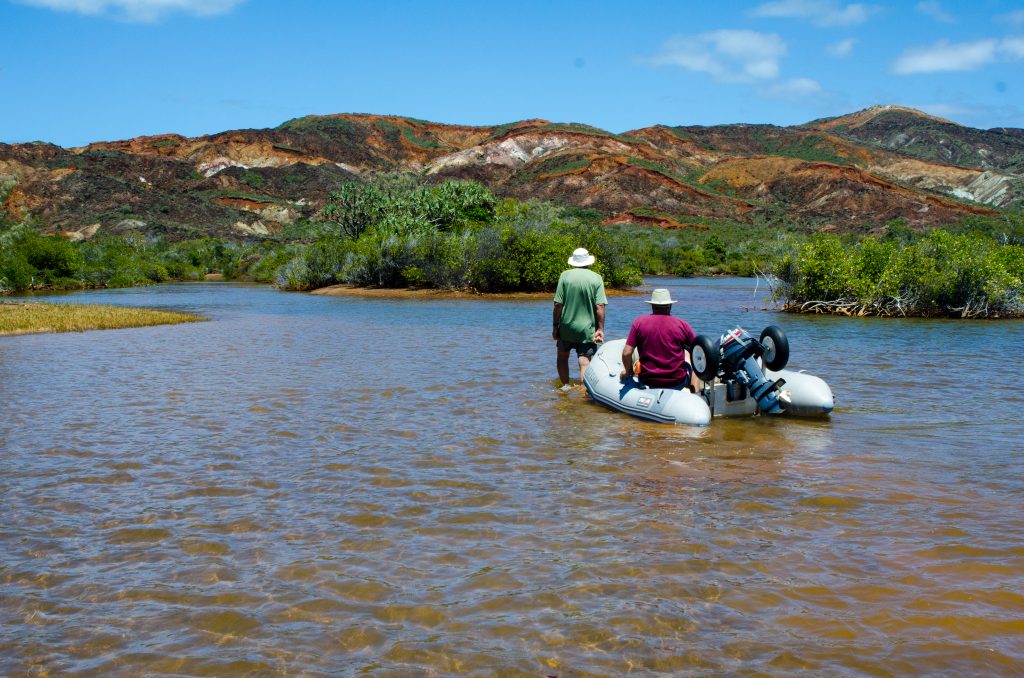 Yes its Denny pulling the dinghy. Maybe Bob had to wash clothes by hand but he traveled in style 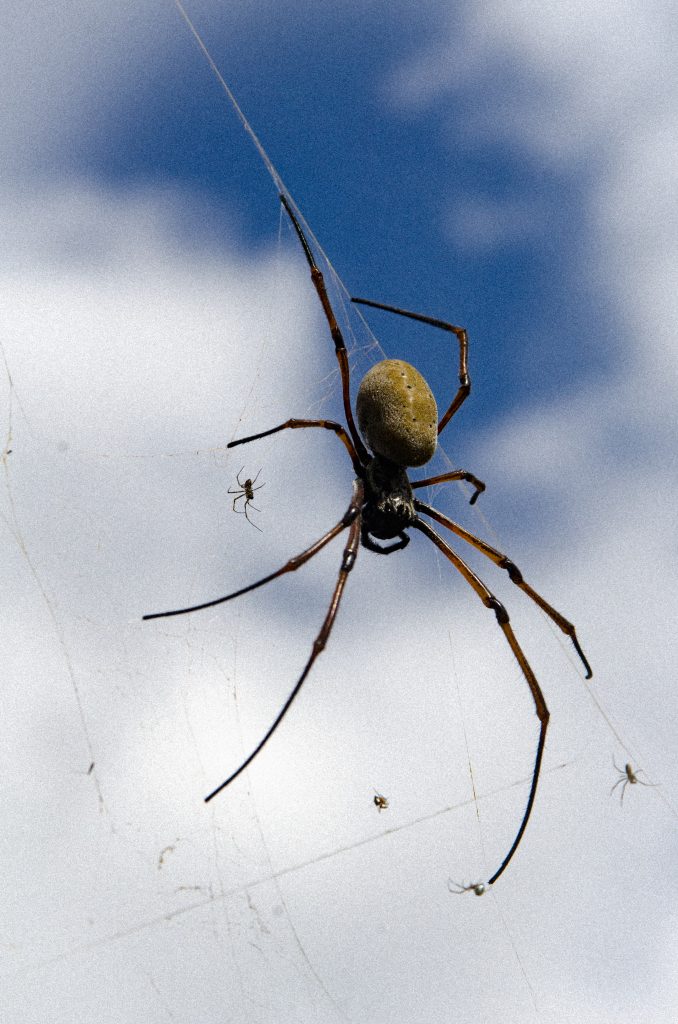 Its not just sharks to be afraid of

We slowly made our way back to Noumea with a stop in Baie Ue. We were anxious to get ready for our passage to Australia but we decided to slow down our return until after the independence referendum as we weren’t sure if there would be some unrest and violence after the vote. As per Wikipedia “The Noumea accord signed in May 1998 set in motion a 20-year transition that transferred certain powers to local government and laid the groundwork for an independence referendum in 2018.” The result was 56.4% for maintaining the status quo. New Caledonians will have 2 more opportunities in 2020 and 2022 to vote for independence. Luckily there was little fallout from the resulting referendum and we could continue on to Noumea and prepare to do the immigration checkout. 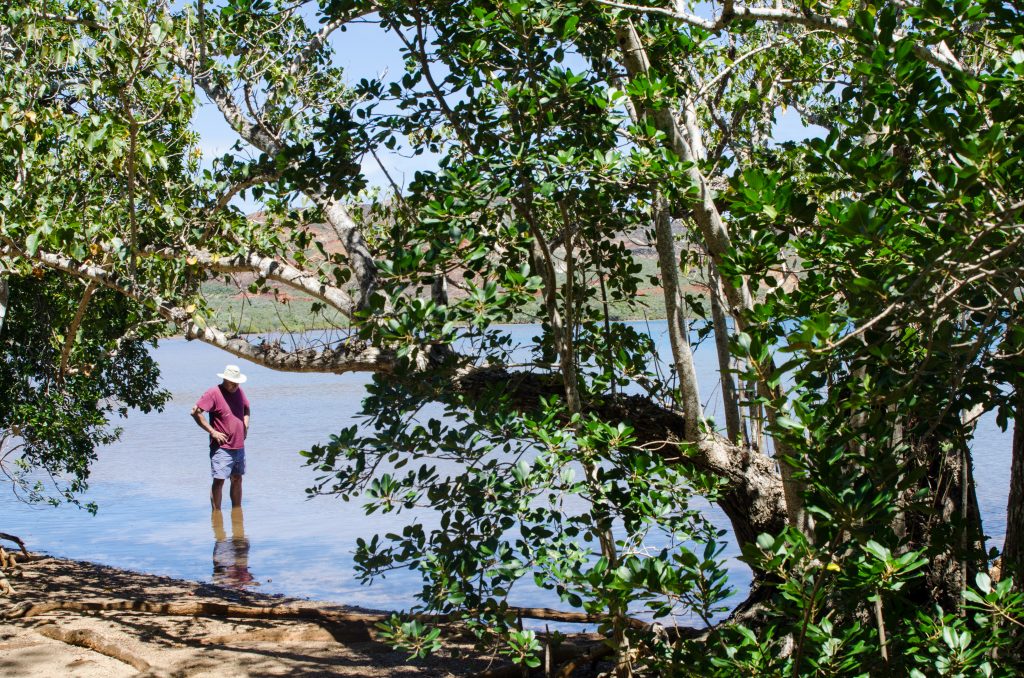 Not seeing any sharks here

In Noumea we did the walkabout to customs, immigration and a final visit to Port Captain, last stop for coffee and chocolate croissants and then off to a mooring by Ile Maitre and wait for a weather window. It was a beautiful resort island and a great place to hang out. Denny and Bob jumped in and washed the bottom of the boat so we wouldn’t take any unwanted critters to the land of OZ. Bob was a little hesitant about being in the water but so long as he had Denny for company he seemed to be ok. 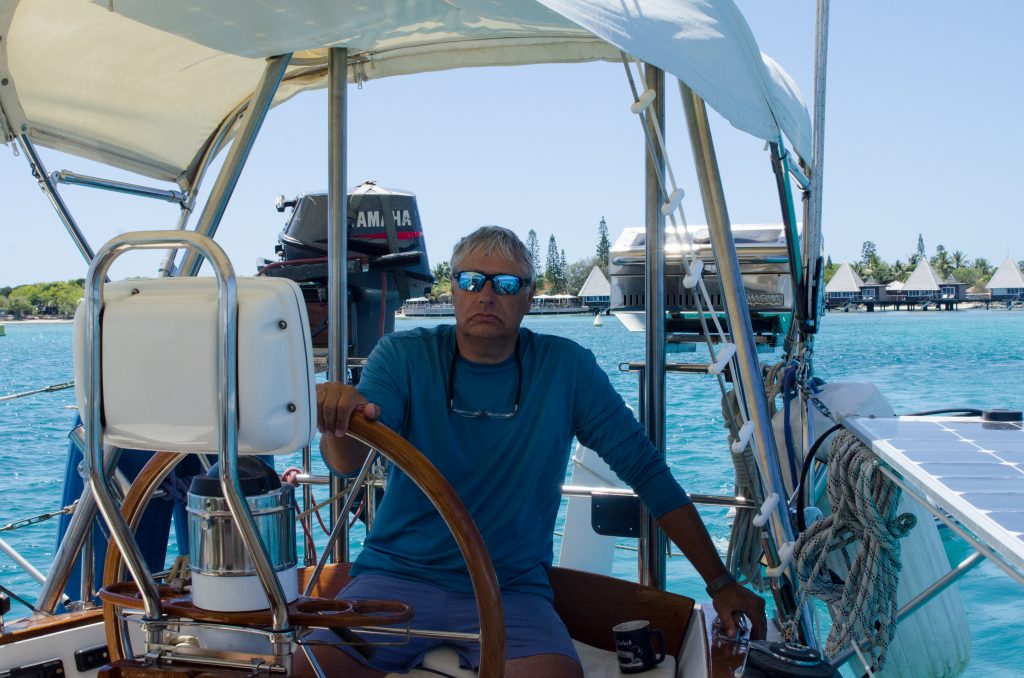 Time to go to Australia

Our passage to Australia took about 6 days, 36 minutes and we sailed 782 miles. We had some swell and wind but also lots of calm motoring. We caught a Dorado on the way and Bob and Denny took turns for an hour reeling it in only to have to release when we noticed its mate swimming by its side. We just weren’t hungry enough for fish to break the pair as they do mate for life.

TO SEE VIDEO OF BOB’S SAIL TO AUSTRALIA CLICK HERE 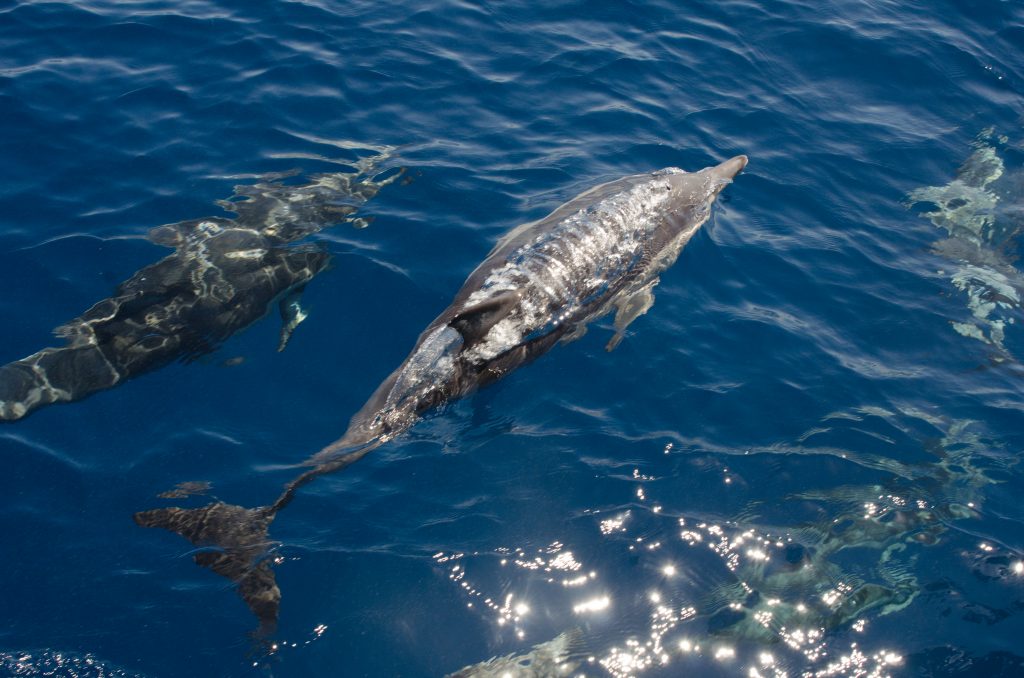 Once we were close to the Australian coast we were welcomed by a large pod of dolphins.

We arrived in Southport, checked in the next day and then made our way to the Boat Works where we had planned to haul out the boat. 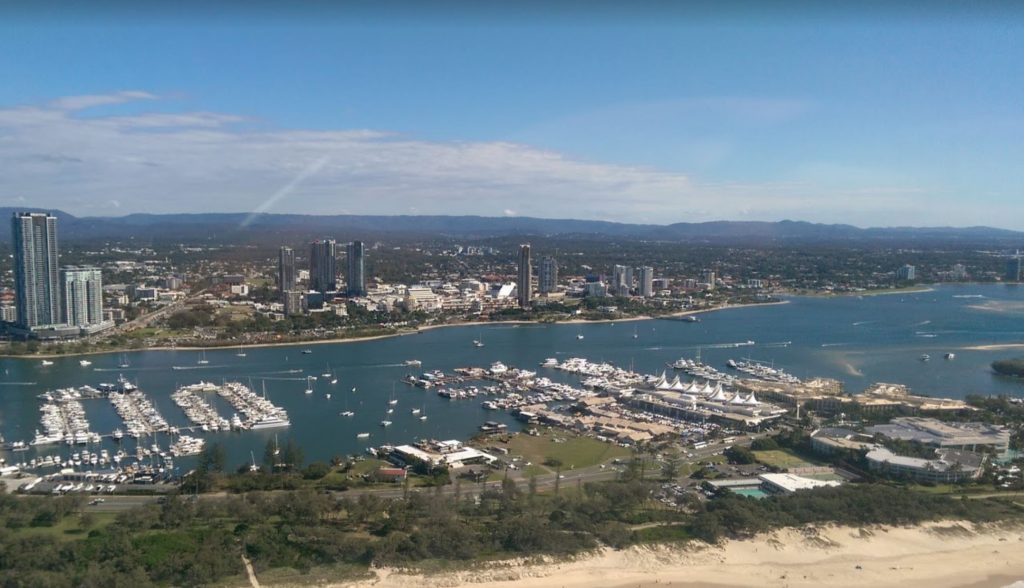 The Boat Works is a great place to work and store the boat while we travelled to North America for the Christmas holidays. 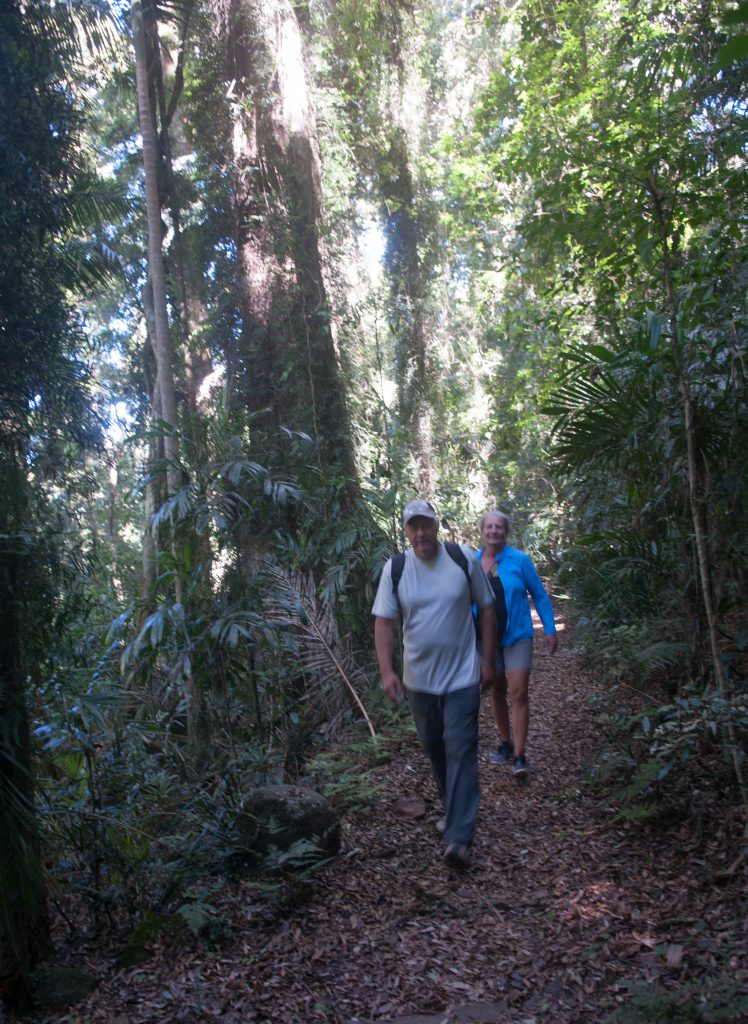 They offer free courtesy cars for use so long as you book them in advance. We took advantage of this and did a few road trips nearby to explore some of Australia before Bob’s return trip back to Minneapolis. We enjoyed Bob’s company, had a lot of laughs, took advantage of his cooking skills and we were grateful for his help during the passage to Australia. Until next time…. 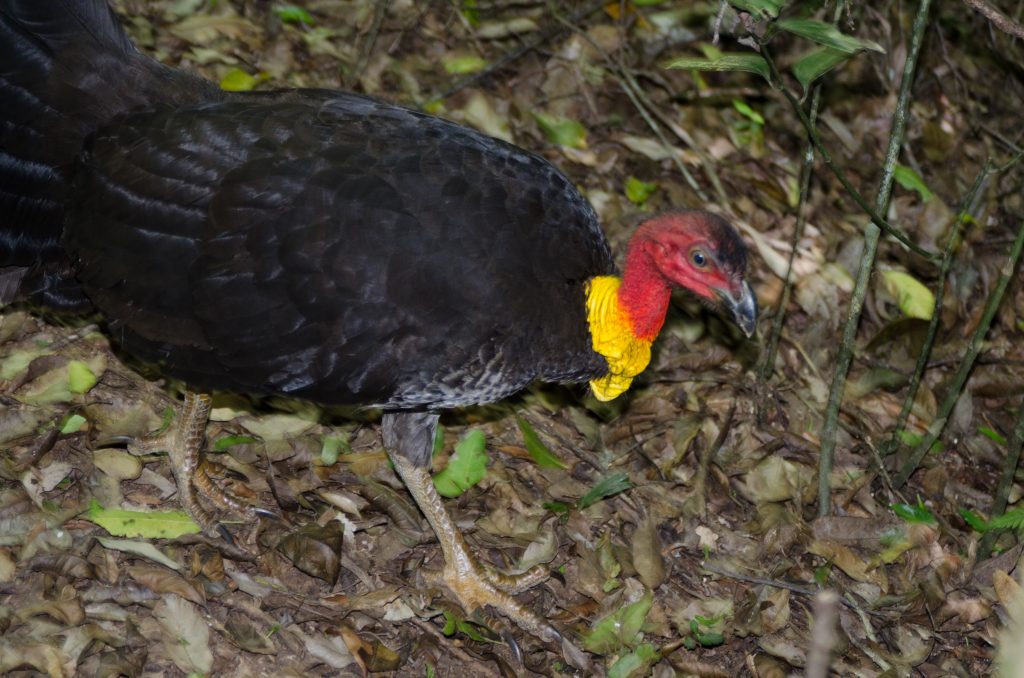 Australian turkey? Christmas around the corner!! 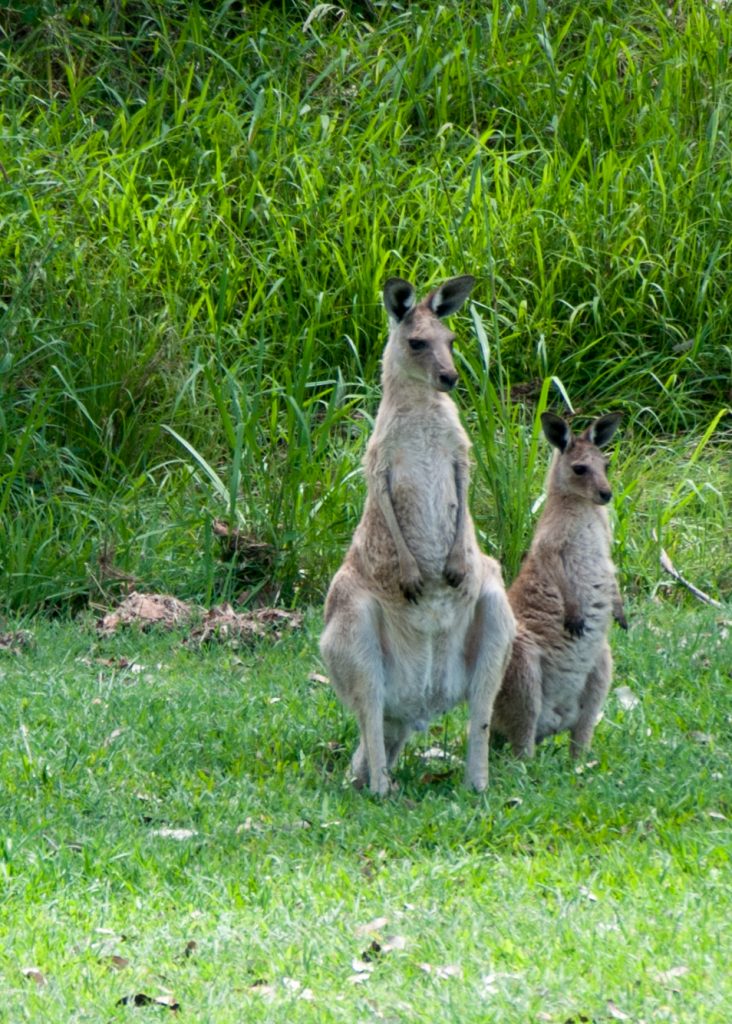 Couldnt leave Australia without a picture of a Kangaroo