It was great to be sailing again. We left Efate with a beautiful 15 knot wind on the beam, music playing on our little portable Bose speakers and the occasional dolphin jumping ( which only Denny witnessed). Instead of doing a straight overnite to Epi we decided to stop in on Mangita Island. We arrived in the afternoon and the wind was slowly accelerating so it was nice to drop anchor after a careful search for a spot that had no large coral reef outcrops or ‘Bommies’. Soon after we dropped anchor we saw some locals coming towards us paddling (not rowing but paddling) a 14 foot aluminum boat. Ironic how the traditional mode of water travel on this island had gone from paddling dugout canoes to driving aluminum power boats back to paddling but using the aluminum boats. Is that progress ? The wind was strong and it looked like the paddlers were really struggling so we set out to blow up the dinghy in case they needed to be rescued. By the time we had the dinghy ready to go they had made it to the boat. They greeted us with a ‘Hello brother and sister’ and started dumping field corn, coconuts, grapefruits and cucumbers in the cockpit. It wasn’t a welcome gift, they were asking for a donation, a mere $30 to fund their local student soccer team. Hard to not give some money when your cockpit is littered with local produce. They also volunteered (for a negotiated fee based on the catch) to take Denny for a night dive for some fresh crustaceans for our dinner. We also had to supply the transportation and batteries for their torches. It was a fine feast of a variety of shell fish but we both agreed we would not do it again. The amount of meat obtained was not worth the effort of killing these beautiful colorful creatures, most of which had been speared by a spear gun.

We spent an extra day here but had no luck getting  to shore because of the gusty wind and the reef surrounding the beach. It was time to sail onward to Epi in search for the elusive Dugong or Sea Cows. We had a little trouble pulling up the anchor as a part on the windlass suddenly broke. The workaround until we can get the extra part requires me to go down below and keep tension on the chain while Denny uses the windlass. I can tell you it isn’t much fun when there is 200 feet of chain out. A little nerving for Denny too when the anchor is free and he has to make a mad dash back to the cockpit to keep the boat from drifting to shore.

The sail to Epi was pretty uneventful, a wonderful 15 knot breeze on the rear quarter.  The anchorage in Epi was a large open bay so it had lots of swell and roll. It was bad enough that we had to throw out a stern anchor to keep us from being a beam to the waves and thus rolling with every wave. Three days in Epi but and no Dugong but lots of turtles.

Every local that we talked to gave us a different location as to where we may find the elusive sea creature. 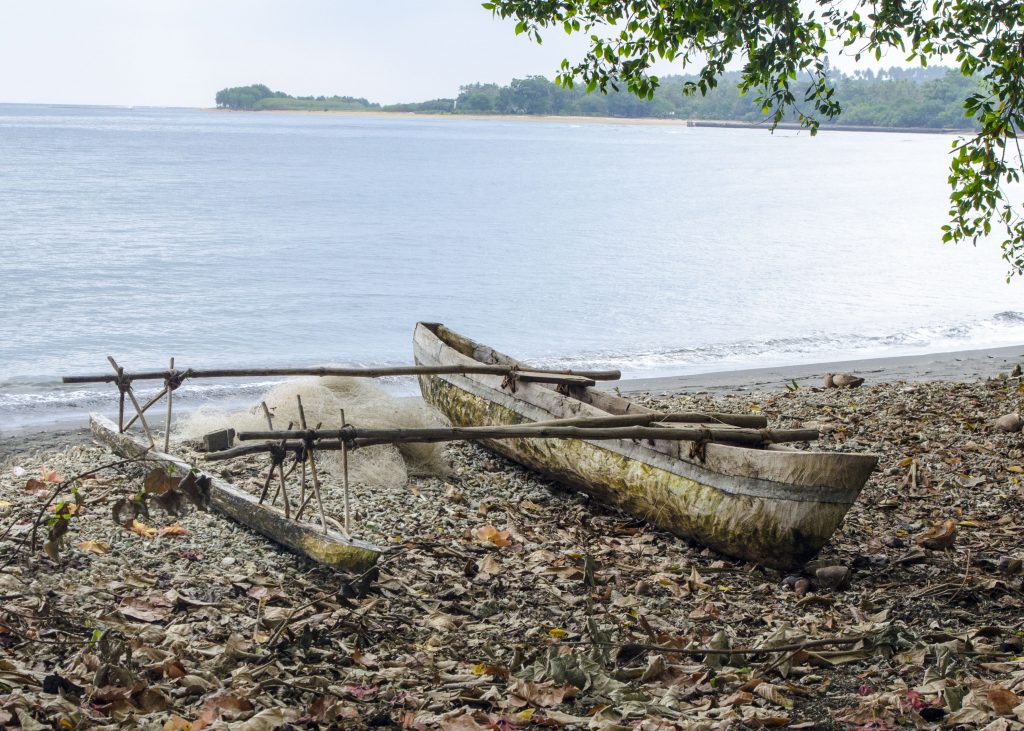 But we did enjoy finally being immersed into somewhat more of the traditional way of life. People used dugout canoes and lived in the simple thatched huts and everyone had a garden, chickens and an occasional cow. They fished with nets and hook and line but it seemed the fish were scarce. Despite the day to day existence it seemed like everyone had cellphones and there seemed to be cell phone towers everywhere. There were also quite a few large trucks for the few miles of road. Walking was not a favorite past time as truck cabs were filled with paying passengers going short distances. There was a Medical Health centre here but only staffed by nurses that made the decision whether you needed to be helicoptered out to Port Vila. There were signs warning people about Malaria and everyone had been given a mosquito tent for sleeping but we were told it isn’t an issue until the rainy season when there is a lot of standing water.

Our next stop would be a day sail to the Maskelyn Islands. 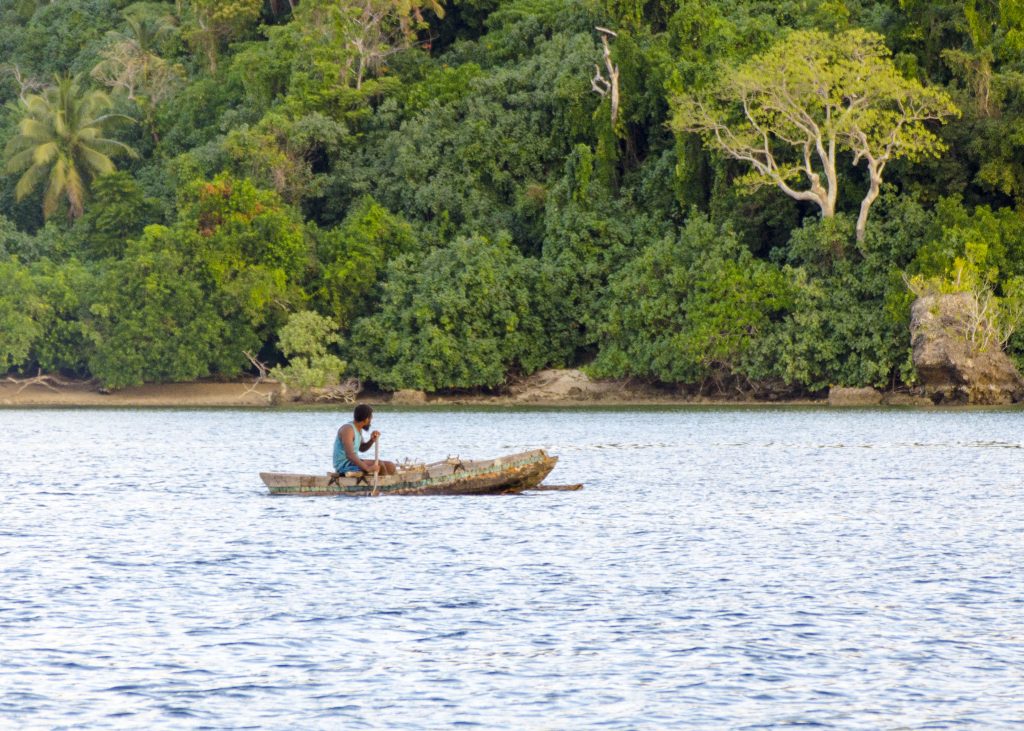 Some locals sailed their dugouts 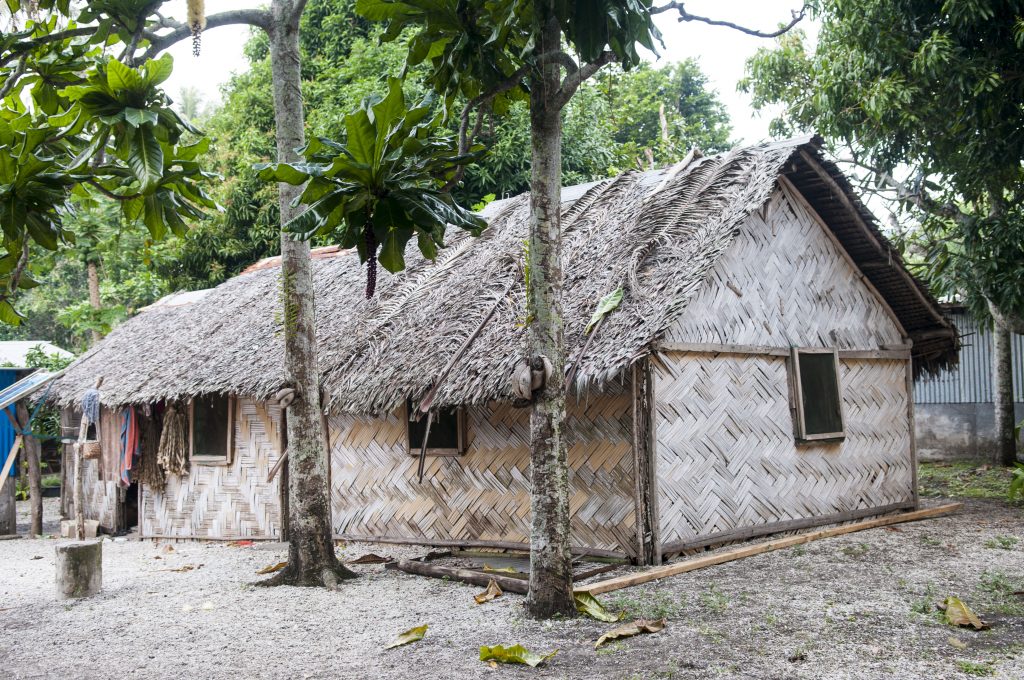 Hand tools, coconut trees and local knowledge and you have a home! 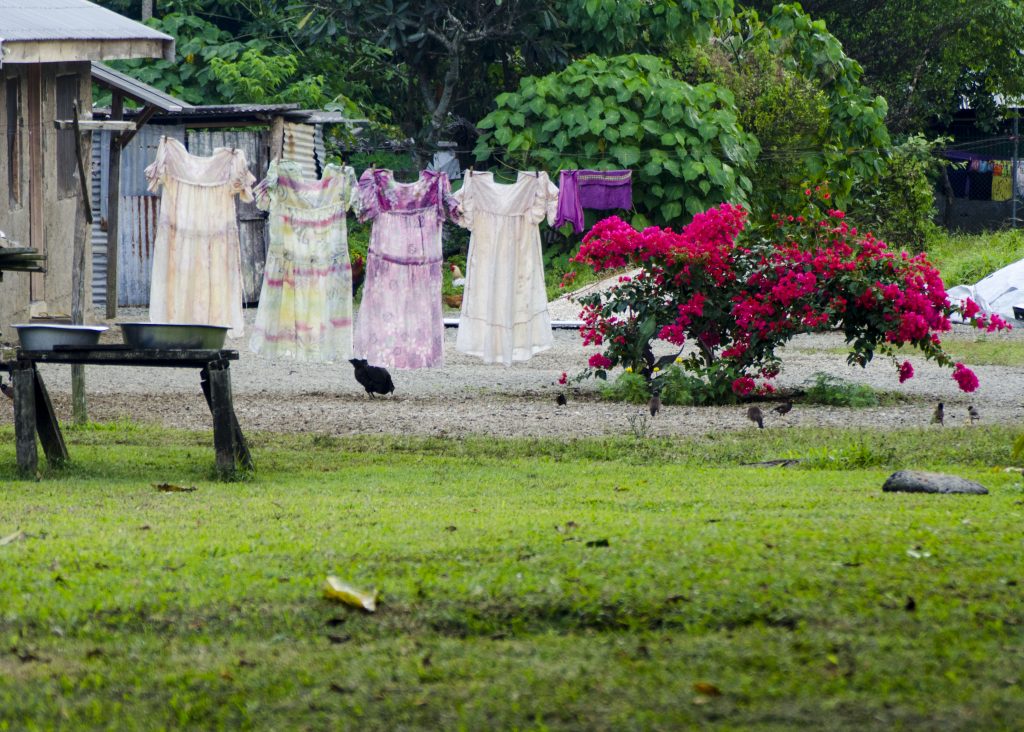 Port Vila was home for Landfall for almost a month. Shortly after arriving in Port Vila Denny had to fly back to Minneapolis to attend his mothers funeral. We basically grabbed a mooring, made some flight arrangements and the next morning he was on a grueling 51 hour flight which included a couple layovers.  We find it hard being so far from home when things happen so we do our best to get back just as soon as we can.   Alzheimer’s had taken her years ago and this was the final chapter.  She was the easiest going person and was always supportive even in doing something as bizarre as sailing around the world.  She will be truly missed.

I stayed behind as we weren’t quite comfortable about leaving the boat unattended. It was a great mooring! 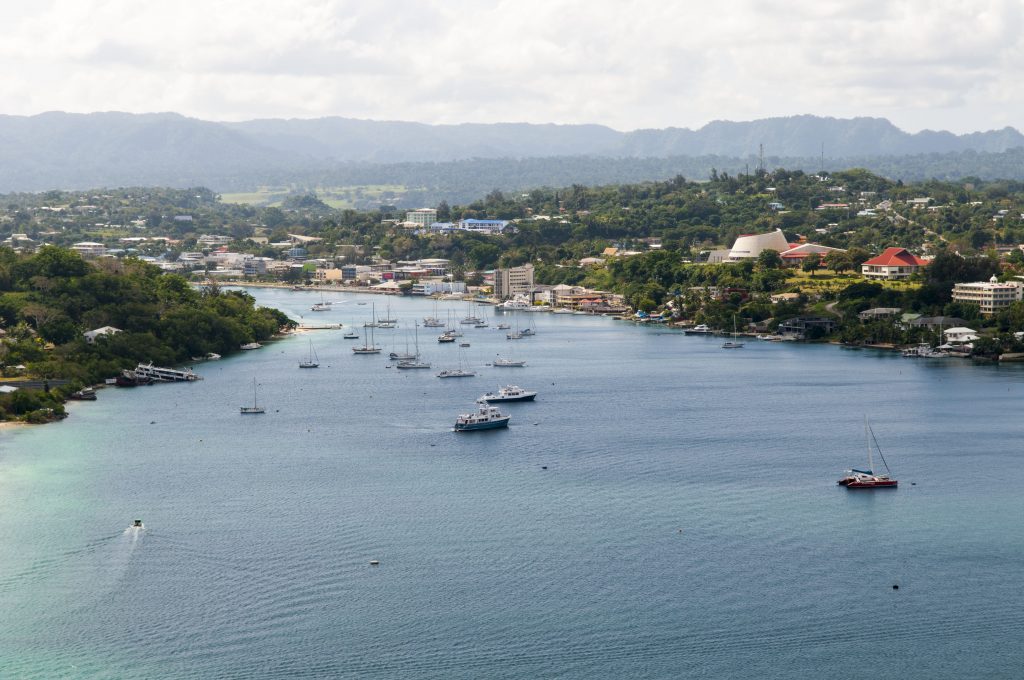 Landfall is somewhere there in the field of boats

So for my two weeks alone I did the usual passage clean up which consisted of cleaning the build up of salt inside and outside the boat. It wasn’t all work. I did explore Port Vila and enjoyed a few nights out with people we had previously met in Whangarei. My favorite was probably the Stone Grill restaurant where a hunk of beef was served on a lava stone heated to 400C and I basically cooked my own strips of meat while eating it. Vanuatu beef is superb!

During my walkabouts in Port Vila I noticed that a lot of vehicles driving around the main street were flying flags of different countries such as Germany, Brazil and France. I came to the realization that it was the flags of countries playing in the World Soccer games. The people in Vanuatu were huge soccer fans and would watch the games on a big screen in the open air. The hollering and screaming could be heard on the boat at ungodly hours as they watched the games streaming live until 4 am in the morning.

Denny was back after a whirlwind two week trip and we prepared for our cruising around Vanuatu.

First stop, the markets for provisioning. 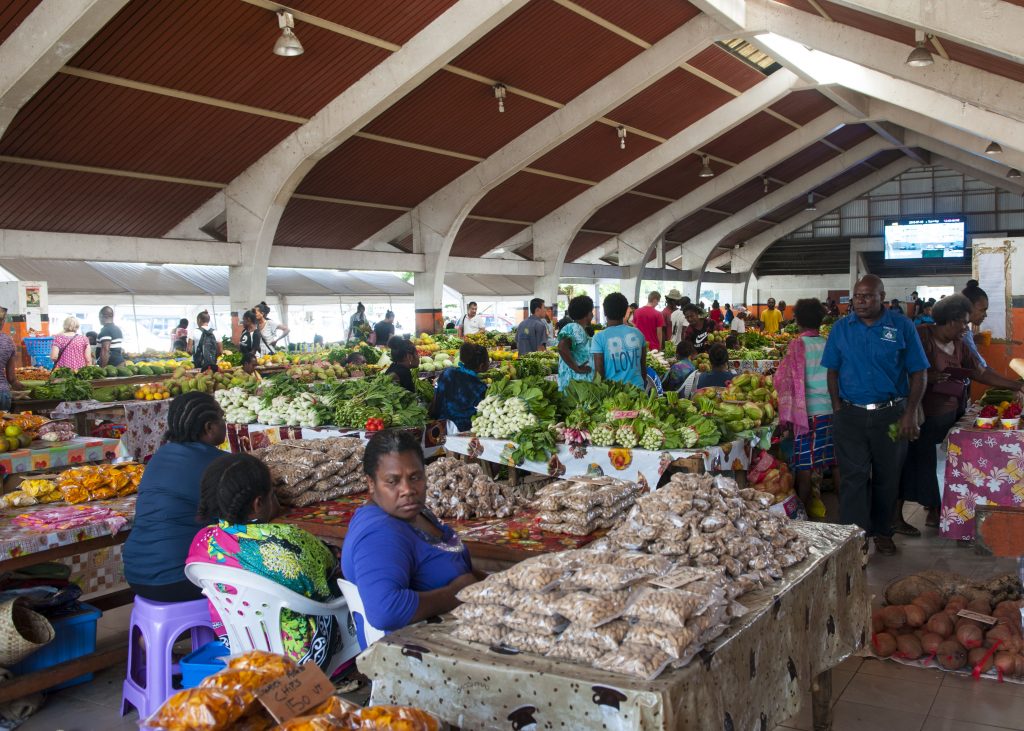 We both love the local markets as it is a way to learn about local customs and foods. The vegetables of the day included eggplant, bock choy, cucumbers, green beans and variety of herbs. And then there were pineapples, mandarins, raspberries, bananas and pamplemousse (pomelo grapefruit).   The market provided an epiphany of colors and the vendors, mostly the “Mamas”, as they are called here in Vanuatu, were all nicely dressed in their “Island dresses”.

We enjoyed a couple of meals at the market and for $4.50 US we got a plateful of meat, veggies and rice plus some entertaining conversation with the “Chef”. Not upscale eating but definitely local cuisine at it’s finest. 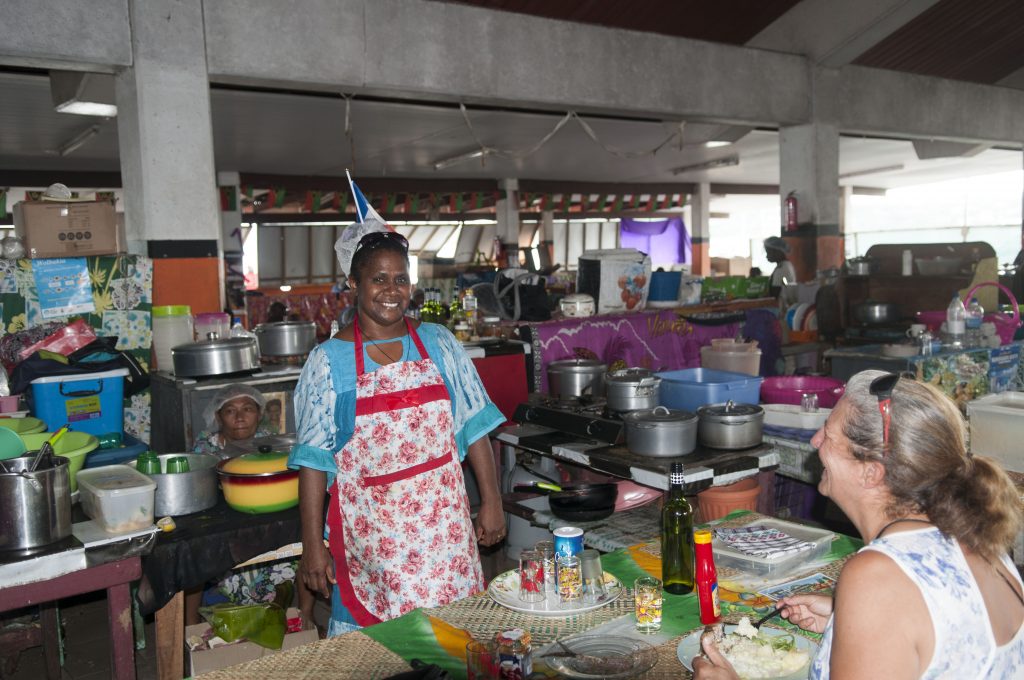 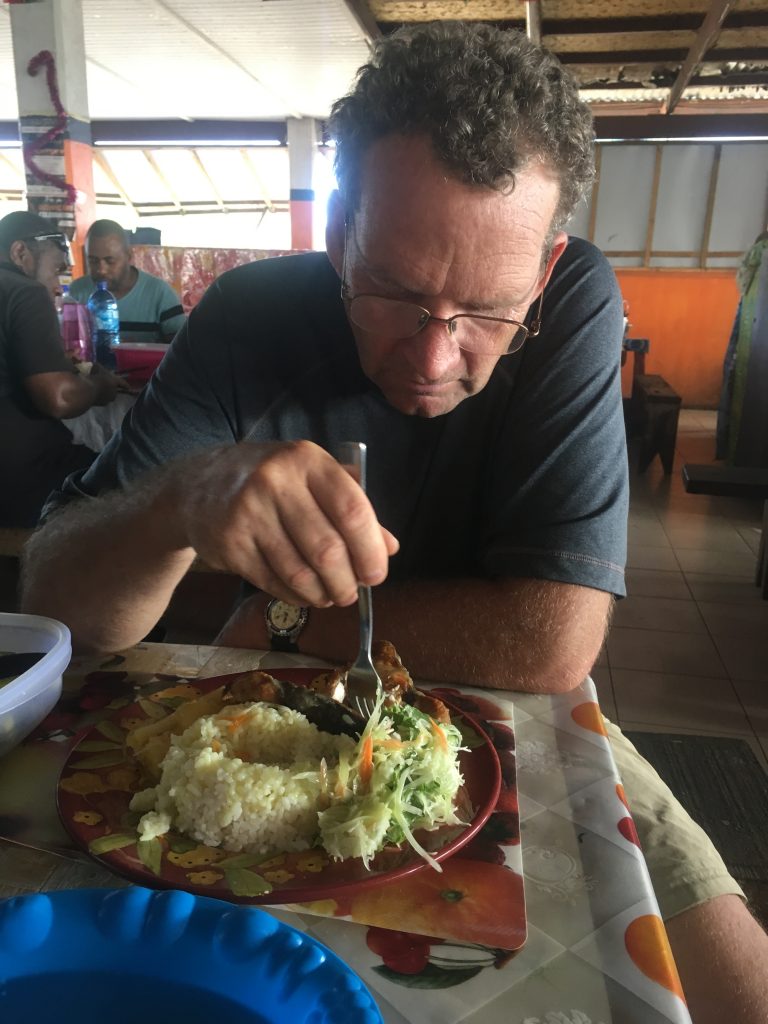 Can’t figure out what the vegetable of the day is??

Before departing Efate we anchored in Esema Bay for some quiet, relaxing time. It turned out to be NOT so quiet with all the local boats roaring by. But early in the morning the huge turtles would make an appearance before the hustle and bustle began.

On the other side of the bay a beautiful 150 feet yacht “Blue Gold” was beached on the reef when cyclone “Pam” passed by Vanuatu, March of 2015. Denny of course had to climb on board and he found everything as it was when it dragged onto the reef. There were clothes, hand held VHF radios, reading glasses and a galley full of stuff. It was as if it had just happened yesterday.  Denny found it  kind of eerie.  Shortly after he climbed on board he was joined by a local guide who was  probably there to insure that things remained untouched. Upon doing some research I found out that the nearby villages of Sunae and Moso had written to the Government to have the yacht removed. Apparently the removal of the shipwreck  is the responsibility of the owner who was arrested in Switzerland, brought to Netherlands for trial and was convicted on bankruptcy fraud. An on going saga with not much hope for a timely resolution. 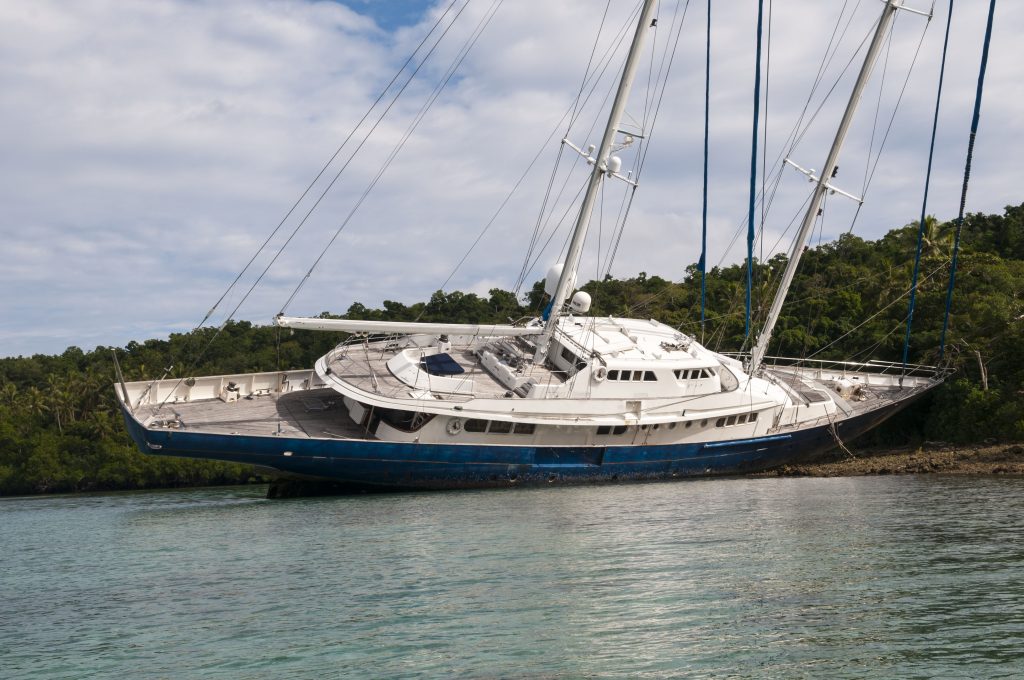 Rhett was born on April 22 at 11:00. Soon after being born he was flown to Sioux Falls SD and admitted into the NICU because of breathing complications. Barb and I left Landfall in Whangarei New Zealand, at Riverside Marina, in the care of dear friends, and flew back to the US. After week or so Rhett went home and we got to enjoy some time with him before flying back to Landfall. 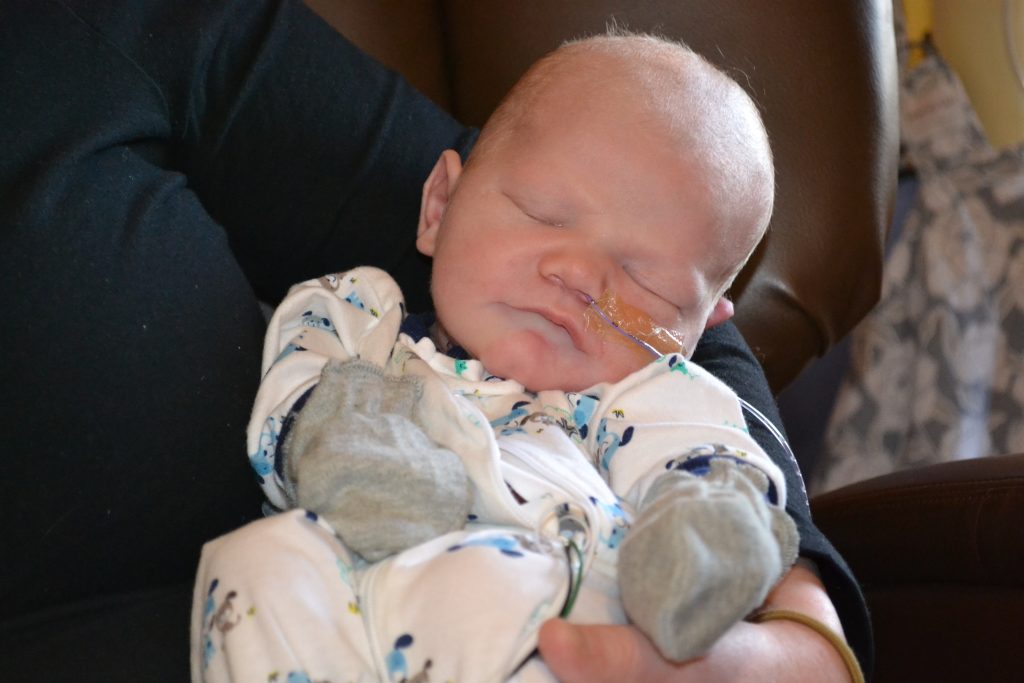 He is less then a week old in this picture 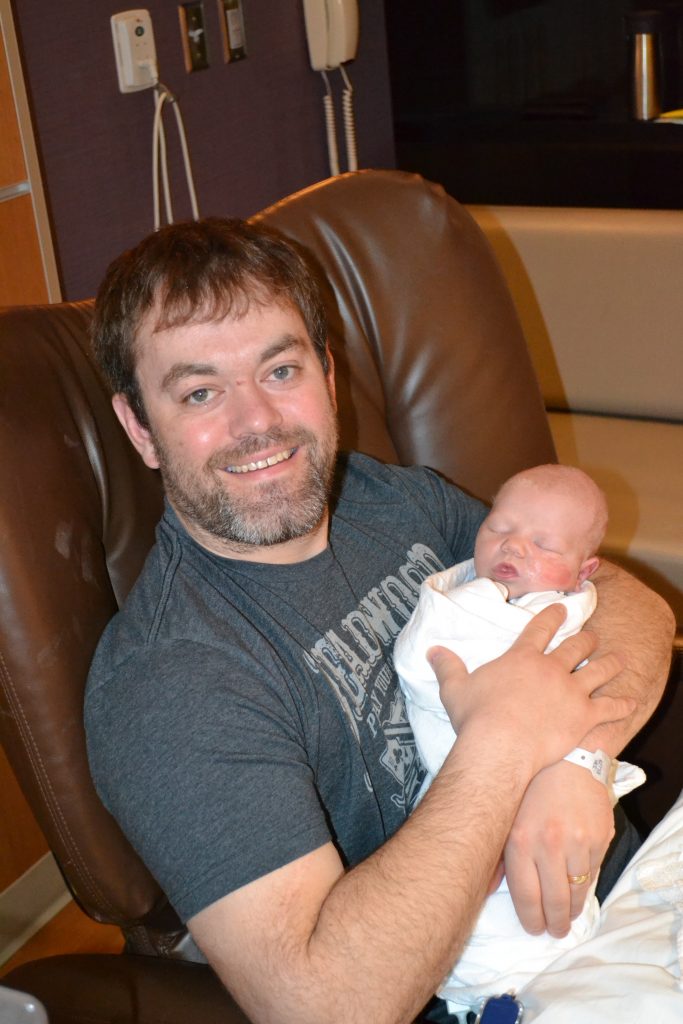 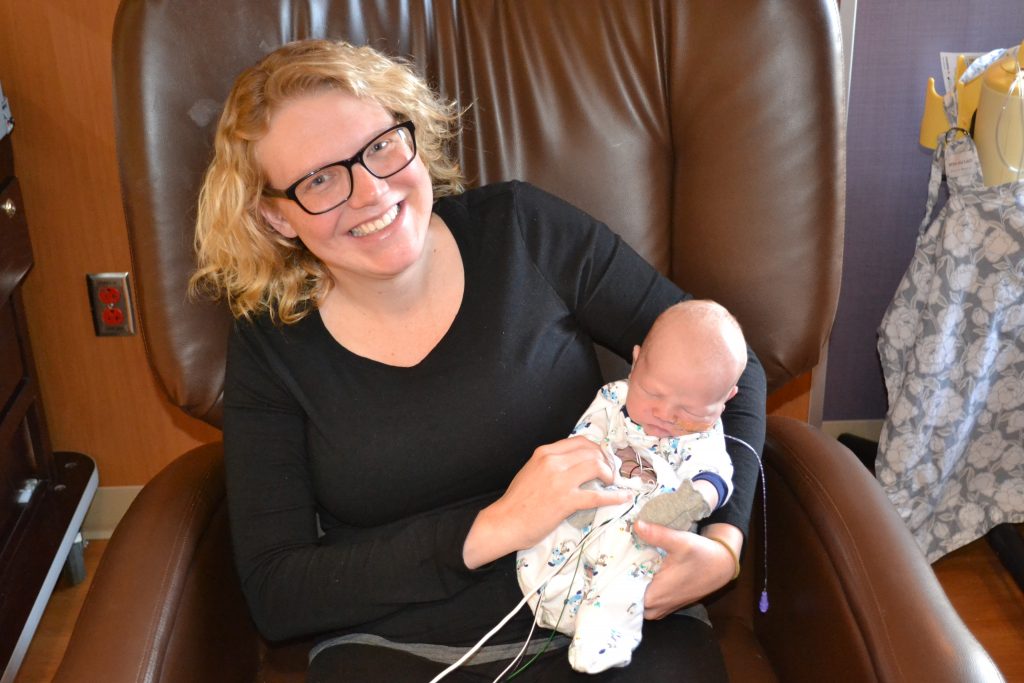 Mom can’t wait to get home. 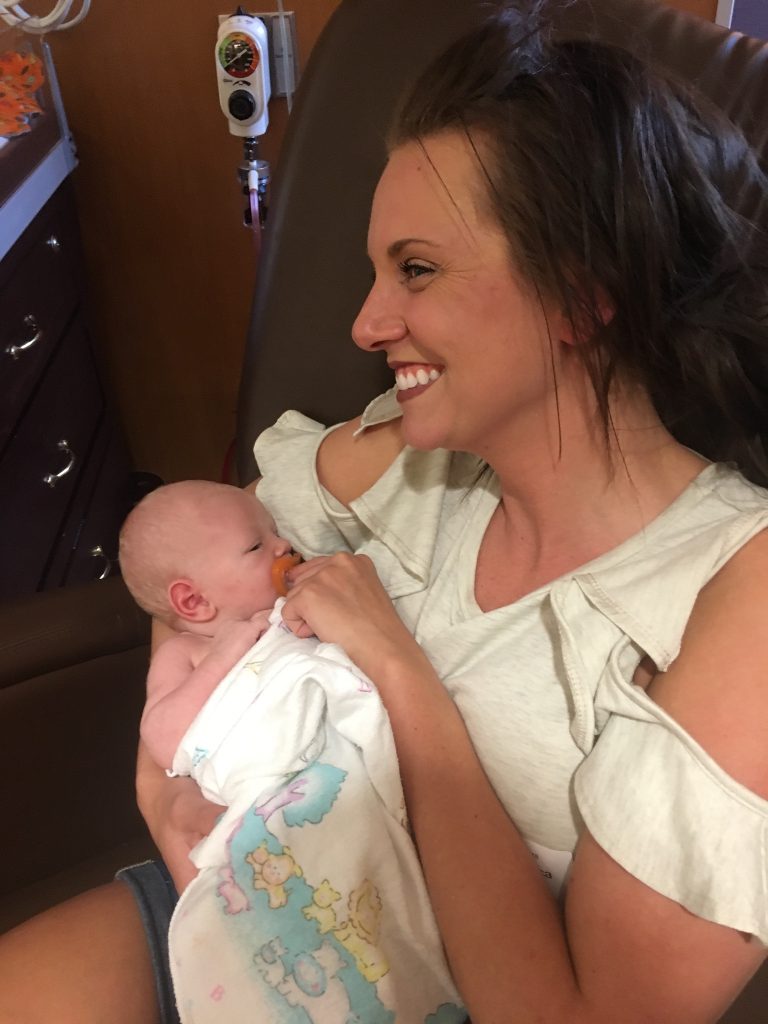 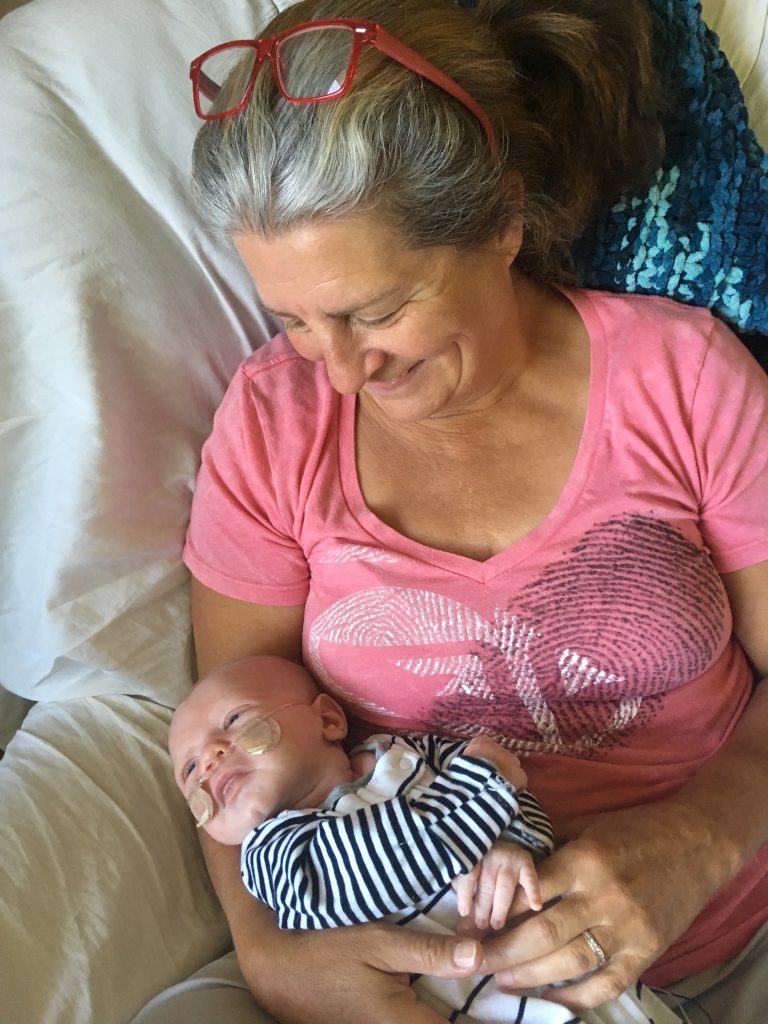 Grandma is in her glory 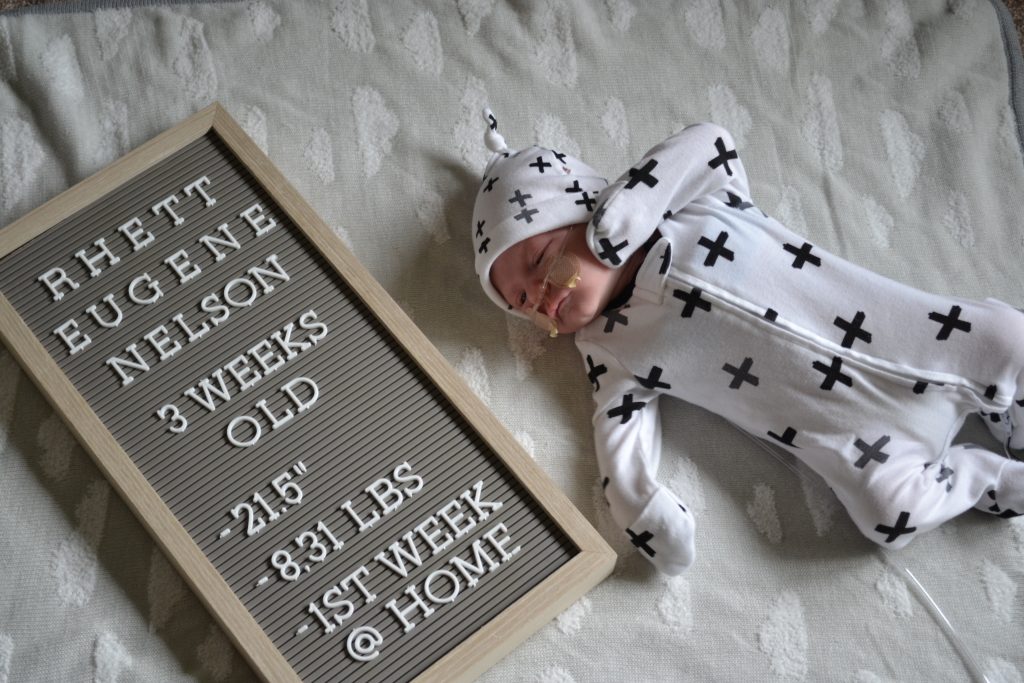 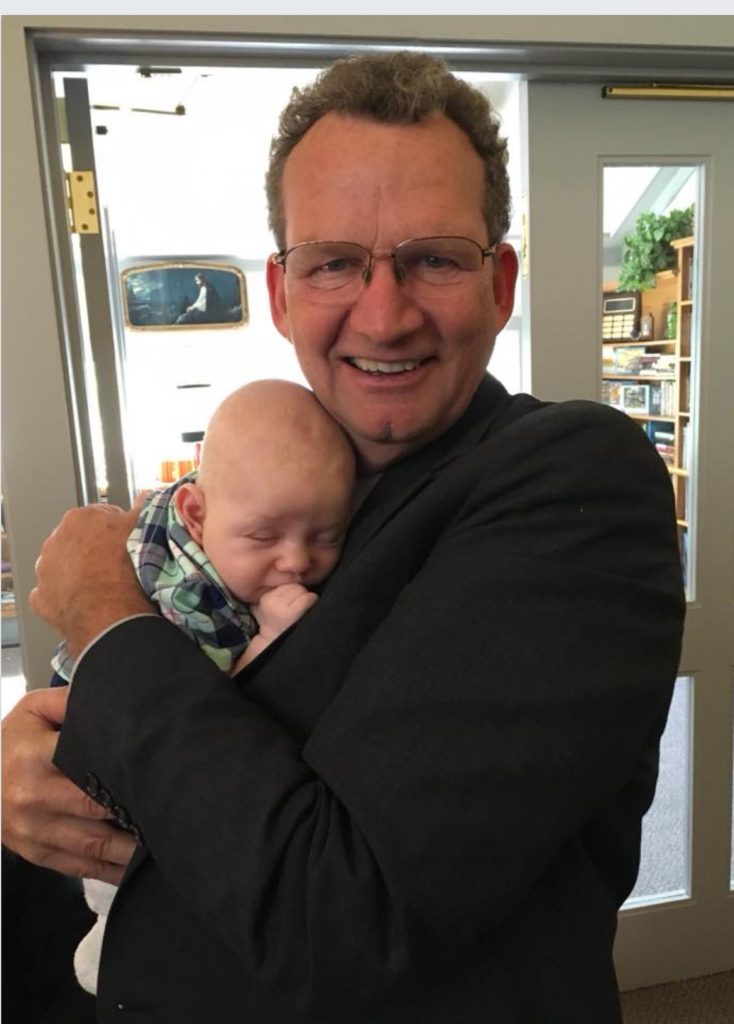 He will hate this one when he gets older 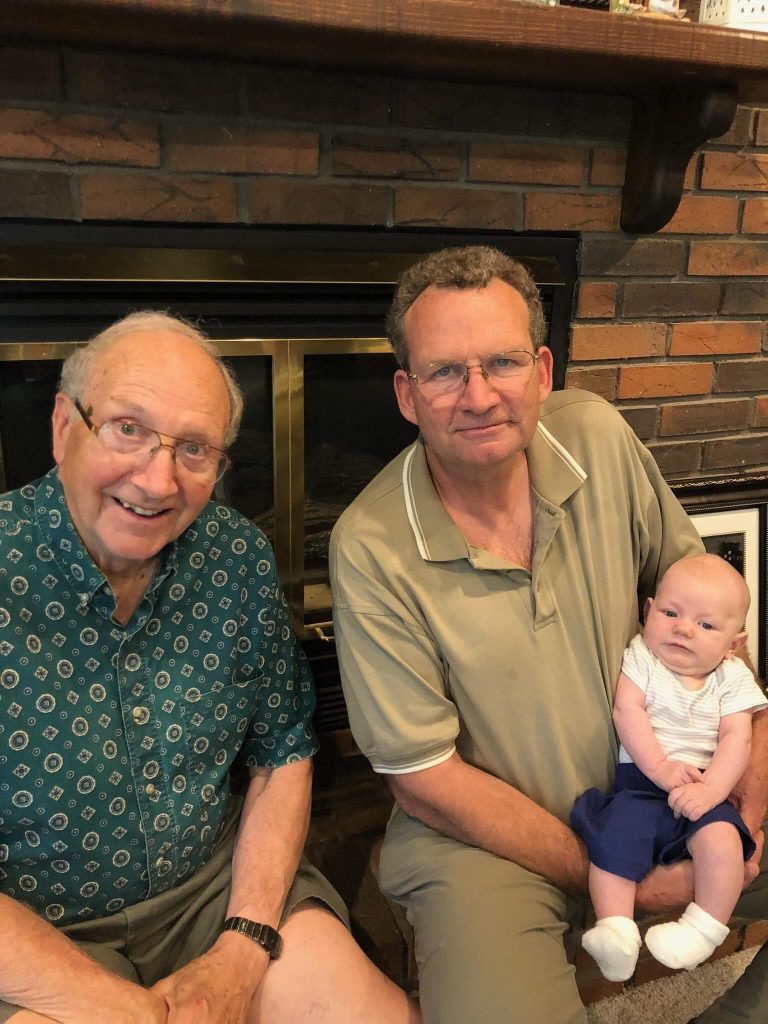 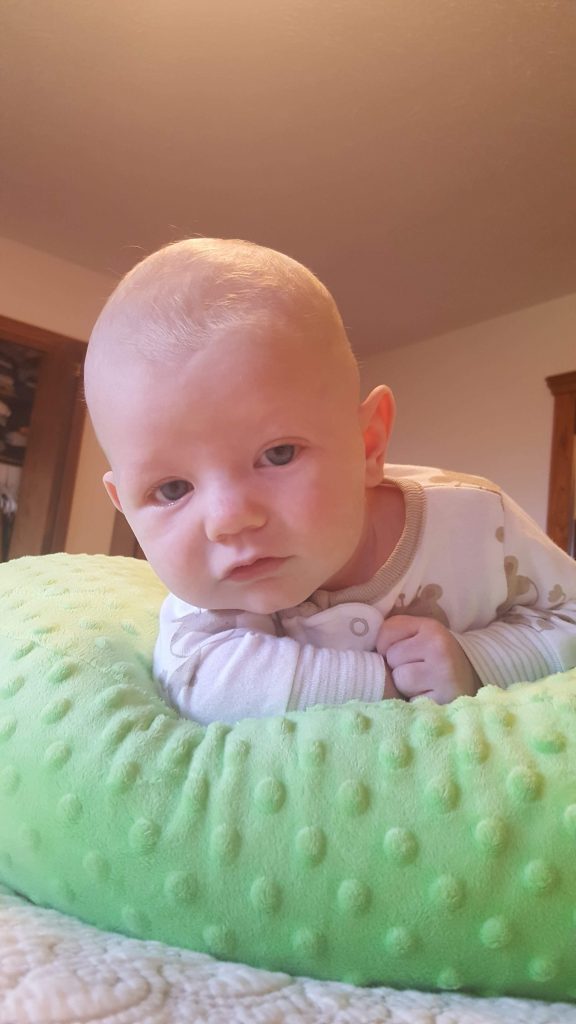 See he is excited to get a postcard from Grandpa and Grandma. He is already in a sailing outfit!

It is hard sometimes being so far away.  We miss people so much when we are out here and know we are missing so much.  It is a hard thing to balance.  People is really what life is all about!