We have been in Savu Savu, Fiji for a week. We have been catching up on emails, phone calls and dining out with friends.  We are now getting ready to make our move to the next anchorage on Rabi Island about 70 miles away. It is a little more isolated and we will not have internet so we will be emailing and posting via SSB. But before we go I wanted to post our Minerva pictures.

We both loved Minerva. There are many stories of shipwrecks and seeing the reefs on the navigational charts, it was a little daunting to think we would have to safely navigate through a pass in the reef  but once there I realized there was nothing to fear. Denny of course had no fear.

We had a couple of relaxing days there. I managed to try out my Oru Kayak for the first time and loved it. 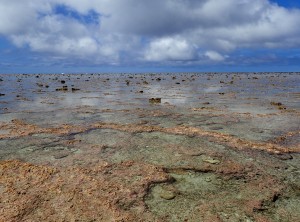 We explored some of the shipwrecks and walked on the reef at low tide. But the highlight for me was the Crayfish feast we had. Denny and I headed to the edge of the reef during low tide and scouted some pools where there may be Crayfish. I will never forget Denny’s face of utter astonishment when he went for his first dip in a pool to come up 30 seconds later exclaiming there were 50 or more BIG crayfish below him. But they disappeared pretty quickly in the overhang crevices. In the meantime the waves were crashing in and 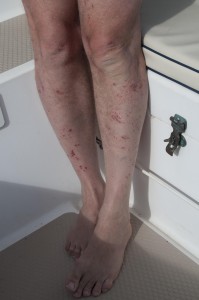 Denny took a beating as you can see by the numerous scratches on his legs (and it was worse than what the pictures can show). We quickly learned that there were pools around with Crayfish but far enough away from the edge of the reef so that the waves weren’t washing in. Catching the crayfish was a simple of matter of catching them as they swam to the safety of a rock crevice or hole. 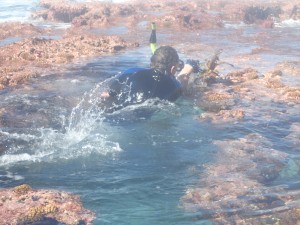 And when they latched on to the rocks with their claws there was no getting them off. In one particular ledge overhang there were 5 lobsters hanging out but when Denny had a closer look he spotted a large Moray eel giving him the evil eye. From that point forward Denny was a little more cautious about sticking his hand in the crevices searching for the Crayfish. We came home with 5 large ones and had a fine feast. 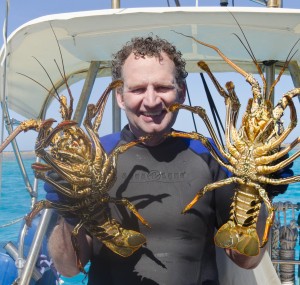 Sunday September 4, 2016 Posting by Dennis: 16 45.239S 179 21.058E http://maps.google.com/?z=7&t=k&q=loc:16%2045.239S%20179%2021.058E We have made it to Savu Savu. Had a pretty quick trip,at least for Landfall. It was a bouncy ride with the waves slamming into the rear quarter. Makes doing anything a real chore. Just moving around is a lot of work. Tomorrow we will go into the marina and do customs. We managed to catch a nice Dorado it was about five feet long. Cleaning it while you are rolling around is not the most fun either, but now we have fresh fish and lobsters tails in the freezer. We should have internet in a couple of days so we may be able to do a posting then. Until then hope you all are doing well.