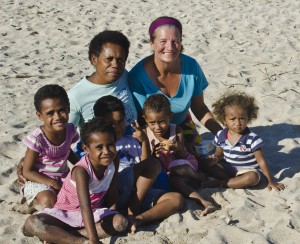 The village of Yalobi perfectly fits the quote “an island of calm in the sea of craziness that can be the modern world”. As we brought our dinghy to shore we were greeted by a couple of young children with big smiles. They brought u 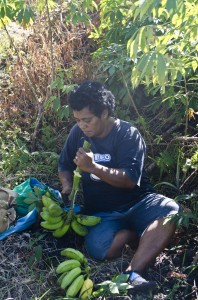 s to where their mom was sitting with a display of her local art spread out on a mat. She encouraged us to buy her sea shell necklaces and made us promise that she would be our guide if we wanted to do any hikes near the village. She was very forthright and made it very clear that visiting cruisers was a large part of their income. After a cup of tea and a chat with French cruisers the 3 pre-school children led us to the chief Tom’s house. They were fighting to hold my hand, happy with the “Lollies” that I had pulled out of 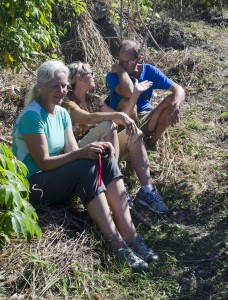 my backpack and given to them. The Sevu Sevu with Chief Tom was a repeat of the Daliconi village. It appears that the traditional Kava drinking ceremonies are slowly vanishing. Maybe we will get to experience this in the more remote villages.

While in Yalobi, we did two hikes with different guides and with a few of the other cruisers. Of course one hike took us to another lookout, the other hike took us to a cave that the locals use to take shelter in during cyclones. It wasn’t a deep cave but well protected. During the last cyclone, the locals squeezed themselves into the cave for 2 days! After each cyclone the locals go back to the village and start the rebuilding process and this is something that they accept as a way of life.

The highlight of our stay in Yalobi was the visit to the Primary school. The school is attended by the children of Yalobi and two other neighboring villages. The 200 + kids that range from ages 6 -14 stay in dormitories near the school. The kids start school at 8 in the morning and after school they all have to do ½ hour of chores which includes washing clothes by hand. On Friday afternoon’s they go home and come back on Sunday. Each village is responsible to provide the funds and or food for a year. The families of Yalobi each take turns preparing the food for one week. There are about 50 families so each family would have a turn at least once a year. As we left the school grounds some of the children followed us and wanted us to take pictures of them as they did handstands. They would run back and gather around me as they all tried to look at the pictures on my camera. They would each squeal as they spotted themselves in the picture. Such joy from such a simple act!! 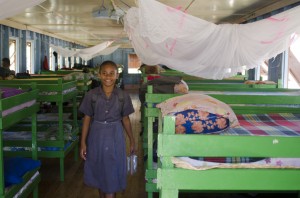 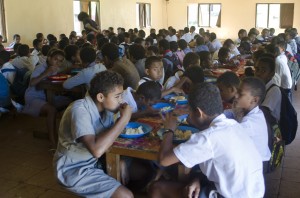 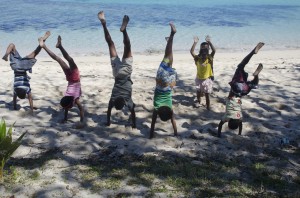 We had our first meal of crayfish and  shared a few happy hours and meals with Robin and Jennifer on Katydid and Zig and Barbara on Sorceress. It was great to share an anchorage with these special people! 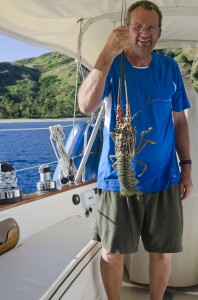 As we got closer to our planned anchorage we realized we were going to have to make alternate plans. The hillside near the bay were we wanted to go was ablaze and the black soot was everywhere. It would not be a good to place to go. The soot was already peppering the deck. It must have been a controlled fire gone out of control. We thought that it may have been the locals burning the brush to prepare it for their vegetable plantations. But we later learned that they also use fire to scare out the wild pigs which they trap and spear. Well I am pretty sure the large fire roasted many a pig on the hillside. 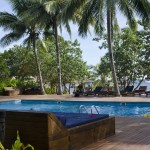 We ended up anchored just outside the Octopus resort. We were able to go on shore and 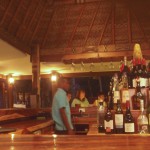 sit at the bar, enjoy the beach and have a dinner as long as we left our credit card at the office. We did have the $50 three course dinner which included Calamari appetizer, Wahu for the main meal and banana cake with ice cream for dessert. It was another disappointment with a mass meal production taste. Most of the people at the resort were young families with small children and mainly from NZ. We shared our dinner table with a single dad and his young son who were from Brussels. I asked him to speak Dutch to me as I can understand the language (my parents are Dutch) but I found it difficult to interpret his version of Dutch.

People arrive at the resort by Helicopter, the large commercial catamaran ferry called the Yasawa flyer, or by sea plane that simply land and take off among the anchored sailboats. 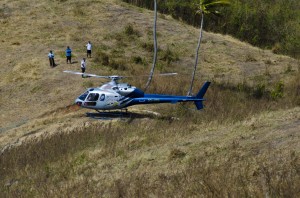 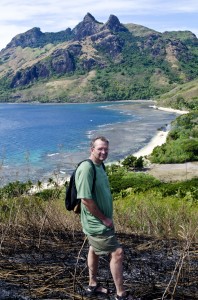 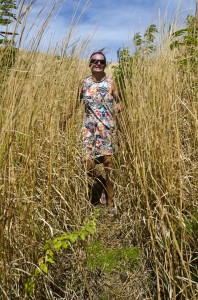 Of course we had to do another lookout hike. We opted to go without a recommended hike and ended up going through lots of Cassava plantations, scorched land and 7 feet high grassy terrain. The topography of the land was beautiful and it reminded us a lot of the Marquesan Islands. We snorkeled a little and  the reef looked healthy but there wasn’t a large variety of reef fish. 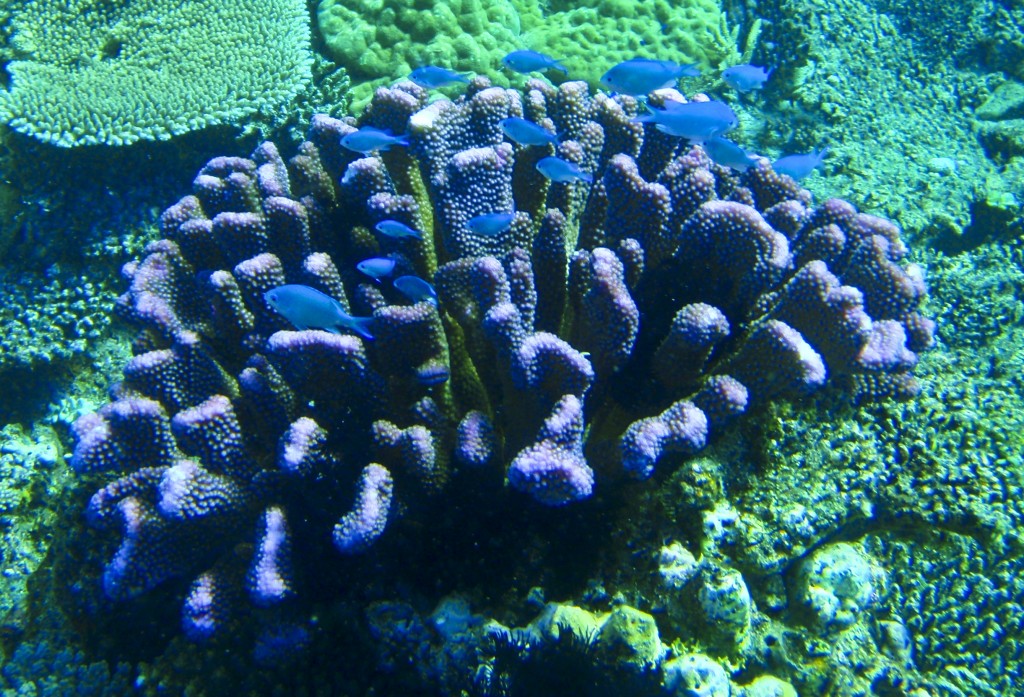 We are realizing that anchoring in Fiji means picking a bay where the land protects the boat from the wind. The bay will depend on the direction of the wind for the day and this could change throughout the day. But there is nothing to protect us from the rolling of the boat especially when the wind holds us a beam to the waves. Dennis will sleep through anything but I end up moving out to the salon and read myself to sleep as I fight the left and then right shoulder roll.  After 3 days of enjoying the resort it was time for our next anchorage and this time we were looking for an escape from the resorts!

It was going to be great to get out of the marina and go somewhere where the water is clean and we can see the fish swimming alongside the boat. We planned to go to a little island nearby called Mana. We were trying not to go to the anchorages that we will be going to with my daughter Allison and her boyfriend Mike.

As soon as we hoisted the main sail, a little tear in the sail started to get bigger. We triple reefed the main but we realized we would have to return to Vuda Marina a little earlier than planned  to repair it. In NZ we will have to look into getting a new sail. At this rate, we will soon have an old boat with all new parts!! 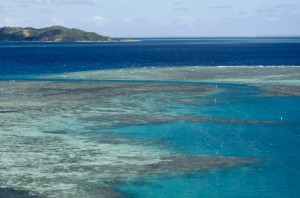 To get inside the reef on Mana Island we had to navigate through a very narrow channel. We went in at low tide and at one point we had barely a foot below the keel and no room to turn the boat and go back out. But we made it through safely. The reef protected us somewhat from the swell but it was very windy and not good for snorkeling. 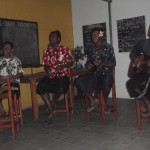 The island had one small village, 3 backpackers, an exclusive resort and one large resort. Most of the people arrived on the island on a large Catamaran ferry, the ‘Tiger IV’, which made 3 daily stops at a large dock nearby our boat.

On our first hike around the island, we visited the resort facilities. It ranged from a 2 star backpackers resort to a 4 star large resort. We ate at the Backpackers as we thought it would offer some local food rather than the tourist fanfare. It was a disappointment but the entertainment was great. My second hike took me to a nice lookout. 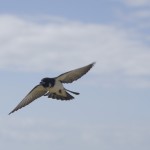 Once at the top  I was entertained by a little Woodswallow bird that seemed keen on landing on my head. From there, the trail took me to a very exclusive resort where I 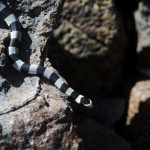 was allowed to take a few pictures but then I was ushered on and out of the resort. As I walked along the shoreline on a low tide I spotted a couple of Banded Sea Krait snakes trying to slither up the rock ledge looking for a place to hide. They are deadly venomous but are not killers. Their mouths are so small they 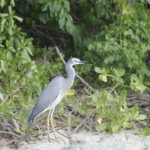 would have a difficult time taking a bite unless I stuck my pinky finger in their mouth and that won’t happen. I also spotted a gray heron and he allowed me to get fairly close for a picture. Mana Island was great for walking and a great place to pretend we were tourists  but it was not a good place to go snorkeling because of the wind so we decided it was time to move to the next anchorage, wherever that may be. 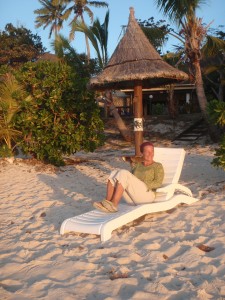 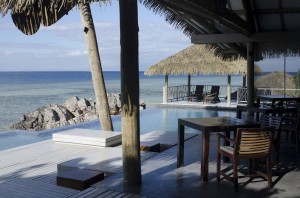