We are currently in Australia and hope to be here for some time. Our first planned destination is Tasmania and we are now in Port Eden waiting for a weather window before crossing the well-known ‘boisterous weather’ Bass Strait. This gives us the opportunity to catch up on the blog updates from Vanuatu and New Caledonia.

Vanuatu version of bungy jumping. Yikes!! Glad its not Denny hanging there

Our last stop in Vanuatu was Tanna. After a long hard day’s sail against prevailing winds we arrived in Point Resolution very early in the morning and set the anchor as the sun was rising. We were determined to finally get close to Mother Nature’s caldron after missing the opportunity to hike to the volcano in Ambrym. We had already checked out of the country and were just making a quick stop. We were aware that we had a great weather window to sail to New Caledonia but only if we left within 24 hours. We quickly got the dinghy in the water and began searching for the Tanna Volcano tour guides. The town was pretty quiet that early in the morning.  We met other cruisers who had already booked themselves a guide and were planning to head to Mount Yasur that afternoon and invited us to tag along. The only instructions we received were to bring a torch, good walking shoes, water and food and meet at a specific location on the beach at two in the afternoon.

We arrived at our meeting point early to make sure the tour guide was ok with us joining the group. Signs of the active volcano were everywhere as we spotted kids enjoying warm water baths caused by hot water flowing into high tide pools. The hot springs nearby were used for bathing and cooking. 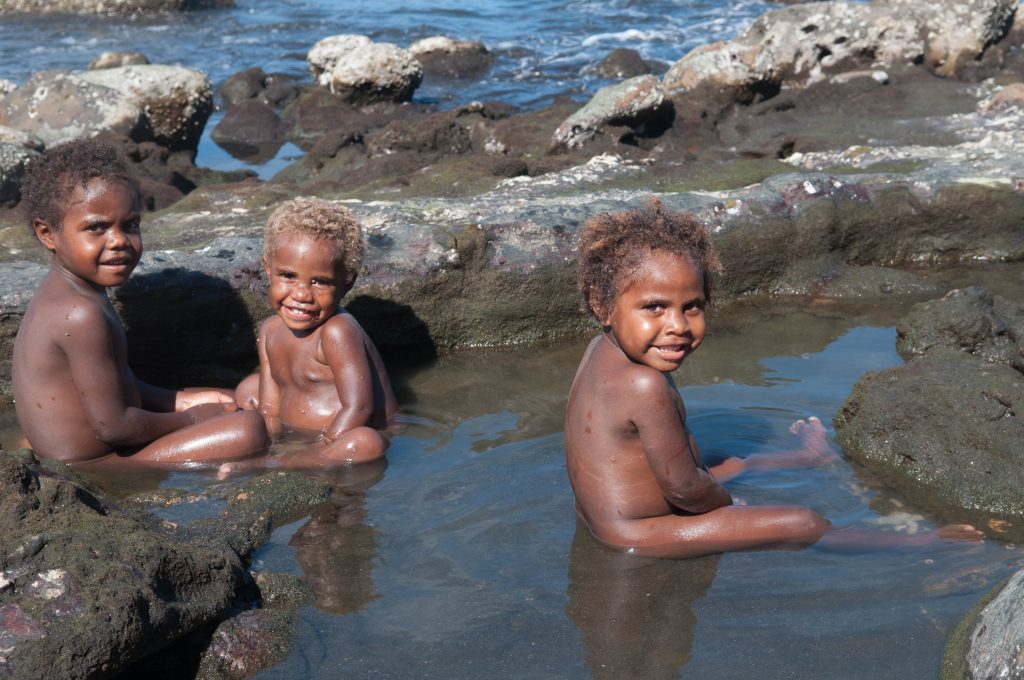 The tour guide was a young man from a near by village and he explained that we would first do a three-hour jungle hike to the base of the volcano. Although we had not gotten much sleep during our overnight sail passage, we were hyped to explore the flora and fauna and had lots of fun getting to know the people in our group. It was a steady uphill climb but we stopped often and our guide treated us to fresh coconut drinks, sugar cane nibbles and green onions to take back with us. We were given the opportunity to swing from a rope and harness over a valley with heart stopping heights. Only one person volunteered and it wasn’t Denny or me (although Denny probably would have if I didn’t give him an “I’ll kill you myself if you do” look). We arrived at the base of the volcano just before sunset and we were told to sit back and have our picnic and stay well-hidden while we waited for the “licensed” Tanna tour to end. That was an “Oh Oh” moment for us.

It was our first inkling that what we were doing was not on the up and up. We were aware that the government had taken over the rights to take people for the volcano tours and that the whole expedition was very expensive with limited time to see the eruptions. But we had tagged along to an already scheduled tour and had been under the impression that it was an authorized one. Denny and I had come too far to turn back and the young guide seemed very knowledgeable and experienced.
We waited patiently and could hear and see Yasur’s eruptions from where we were. The ground shook and the roaring sound of the explosions were incredible. Finally, we got the go ahead to continue up to the mouth of the volcano but not by way of the ‘tourist’ track as there we would be spotted by the posted security guards. We had to crawl and stumble on all fours up the rock face without the use of our flashlights and sometimes had to stop and look up when an eruption occurred to make sure we didn’t get showered with volcano debris. Relief was felt by all when we made it the top and could finally get front row seats to the majestic lava shower that seemed to occur every 10 minutes. The sight was breathtaking and exhilarating and it is impossible to describe the immensity of the thundering force of each eruption.

Denny quickly setup the tripod and camera and proceeded to take pictures but then was told that pictures with flash and Iphones could not be used as the security guards had spotted us and were making their way up. We were taken to an outcropping of rocks and told to hide while the guide went down to possibly bribe the guards to let us wander around! 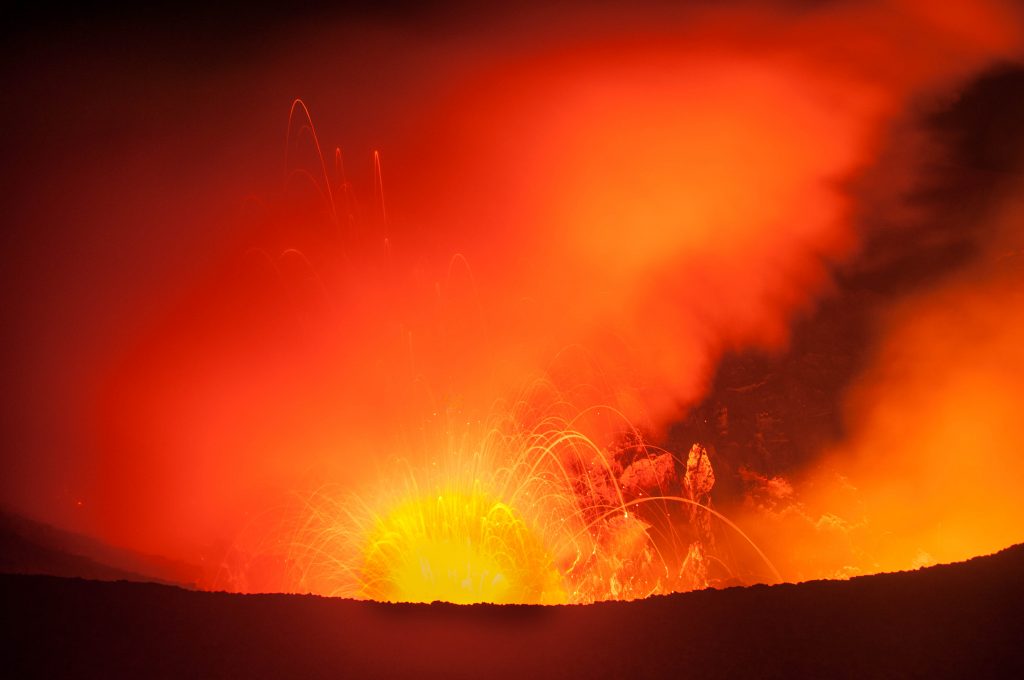 The wait was excruciating and we all felt like we were taking part in a commando expedition. Finally the guide returned and advised us that security was staying at the base and we could explore some more but keep camera lights and flashes well hidden. We were given the option to hike to a lookout point which would allow us a better view of the smoldering lava. Only four of us which included Denny and me followed the guide to the higher vantage point. We crawled to the edge and could look down at the molten red lava but before we could get our cameras out Yasur erupted and the wind carried the smoke and dust towards us. We couldn’t breathe,

we couldn’t see and had to make a quick exit out of there. I hung on to the guide and with eyes closed, stumbled back to the lower viewing point. Denny wasn’t as lucky and he had to make his own way down with tear filled eyes. We took some time to get our breath back and refocus our eyes before we were given the instruction that it was time to leave. One thing was for certain, we were not going to descend without the use of our torches. We were assured that the route we were taking down was on the opposite side of the security gate and torches could be used so long as we kept them pointing down directly in front of us. The way down was just a mountain of fine ash and sand and we slid, ran, stumbled down the volcano. We felt like we were downhill skiing with little control for what seemed like and endless amount of time but really only 10 minutes. When we spotted truck headlights we were told to turn off our torches until the guide confirmed that it was the vehicle that would take us home. We all felt relieved and elated that our great adventure had ended well.

Little did we know that our drive back to the beach was going to take an hour and half over some very dubious washed out roads. There were times where the road was the width of the truck and an inch too far over either side could end badly for all of us. We were sitting in the box of the truck, hanging on to whatever we could and hoping the roll cage would offer some protection if necessary. But the driver was experienced and had taken this route many times. Somebody in our group asked our guide if he had conducted these tours very often and his reply was “No, never before!”. He looked at all our horrified faces and he quickly clarified “never with OLD people” as if that should make us all feel better!!
We arrived back at the beach shortly after midnight and said our goodbyes, thankful to be on our way back to Landfall. Despite the questionable choice of tour guide all Denny and I could feel was awe, exhilaration and very fortunate to be able to get close to a force of nature so powerful, lethal, thunderous and beautiful.
But we had no time to linger in the immensity of what we had just experienced. Our sailing weather window indicated that we had to make an immediate exit and steer a course to New Caledonia. As we had already checked out of the country, we didn’t have the option to wait for the next available window. So although we were exhausted, full of ash and soot, we hoisted sail and left beautiful Vanuatu. Next stop New Caledonia!

One Response to 2018 Vanuatu – Tanna Volcano