Lakatoro would have been a nice anchorage but while we were there the weather was nasty. Denny and I had a long dinghy ride to the dock and from there a 3 mile walk to the airport where Pete and Mel would be arriving. We did manage to find a ride and it was a 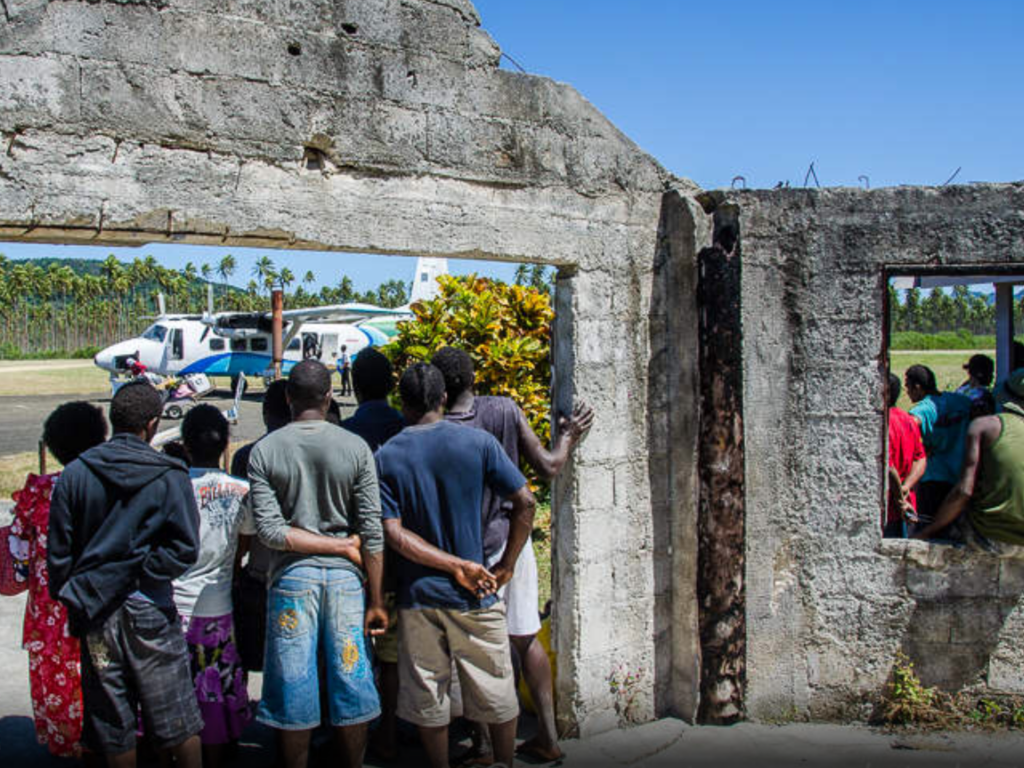 Burned out hulk of an airport

good thing we did because I wouldn’t believe we were at the airport. It was just a burned out building, open to the elements and no security or gates. There were a couple of people hanging out with their luggage and that was the only evidence that we were in the right place. We waited and waited and waited. Finally Denny found somebody that looked like he was an airline employee and asked about the flight schedule. He informed us that the flight had been cancelled due to thunder and lightening storm in Port Villa. So we headed back to the boat not knowing where Pete and Mel were. We finally got a text that explained they were delayed, and then one saying they were on the way. The wind had worsened so we arranged a water taxi for them as the dinghy ride would have been a wet one. With the wind howling there wasn’t much to do except take a little tour of the nearby village. We decided not to stay in Lakatoro any longer and sailed to the next anchorage that was a little more protected. 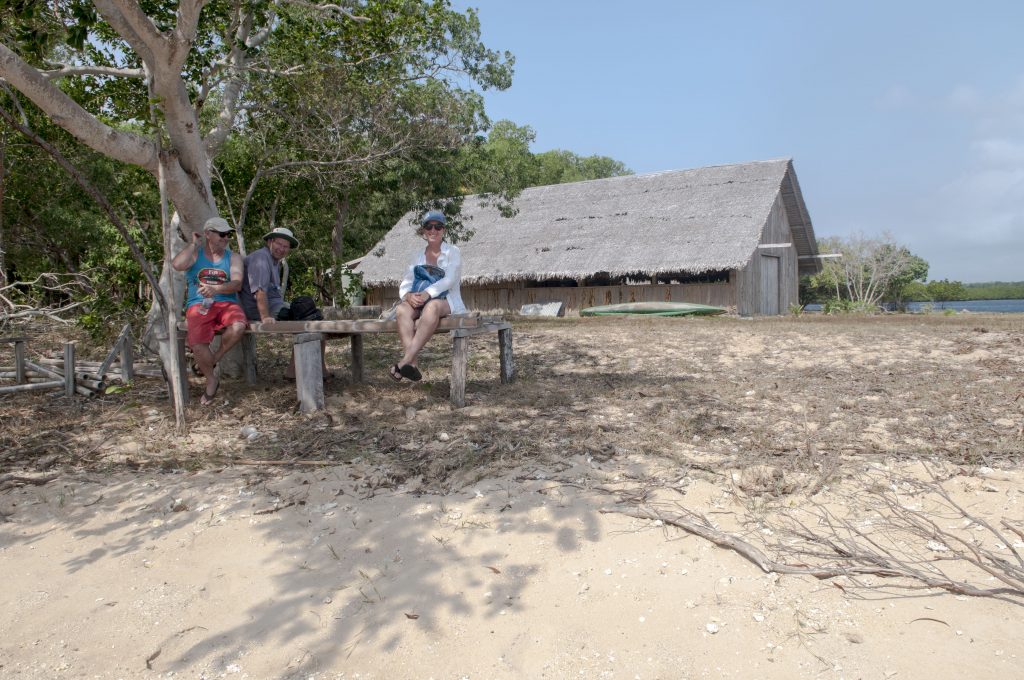 Crab Bay was a little challenging to get into as there was coral everywhere. The little hole we anchored in wasn’t very large with minimal swing room, so we put out a second anchor to keep us from swinging. 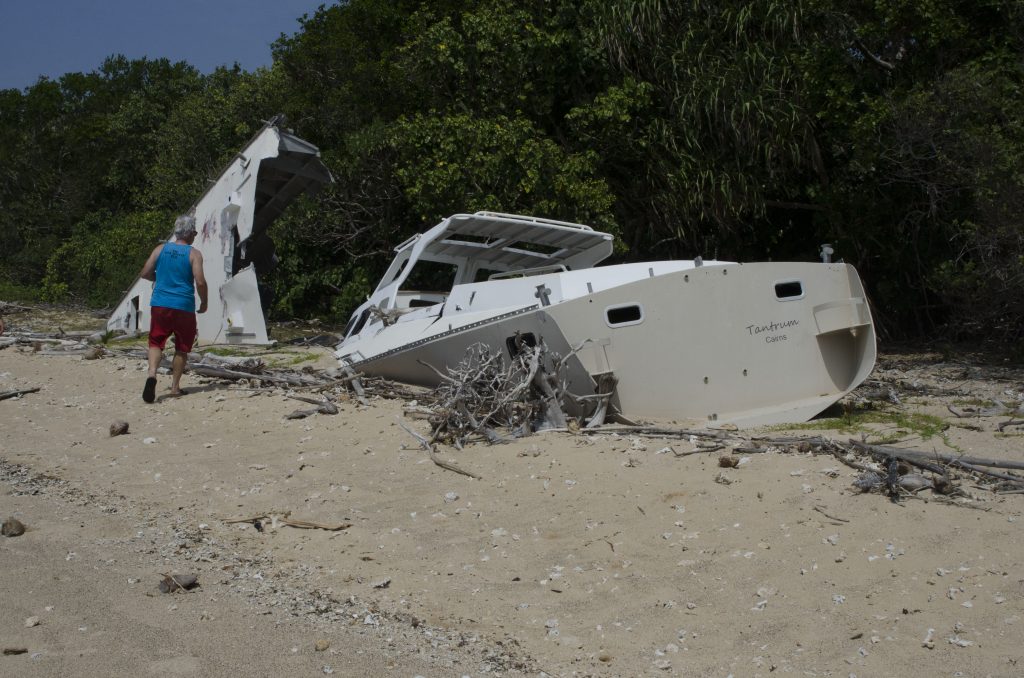 It was still very windy out but we were sheltered and felt no swell. There was a nearby nature reserve with a trail so we decided to do some exploring.

We found another shipwreck on the beach which is always sad to see. We couldn’t find the story about this boat on the internet. One of the planned stops during our friends visit was to do the volcano hike on Ambrym. The hike would take 10 hours through some rough terrain and uphill and it would have to be guided. We decided we would do it in 2 days and hire porters to carry our food, sleeping bags and camera equipment. This would give us more time and energy to enjoy the hike and the volcano. We got a weather window so after 2 days in Crab Bay we set sail for the next Island, Ambrym.

The link to google map will give you an idea of our less than desirable anchorage and the distance we would have to hike to the Volcano. Google describes Ambrym as one of the most active volcanoes in the New Hebrides and one of five lava lakes in the world. We were all pumped to go. 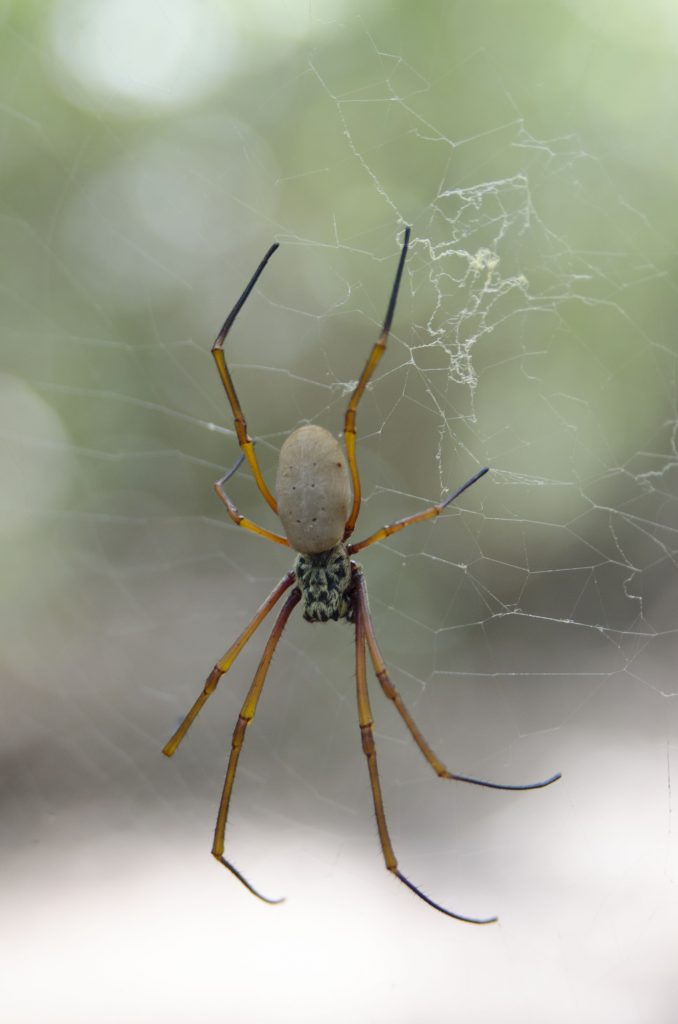 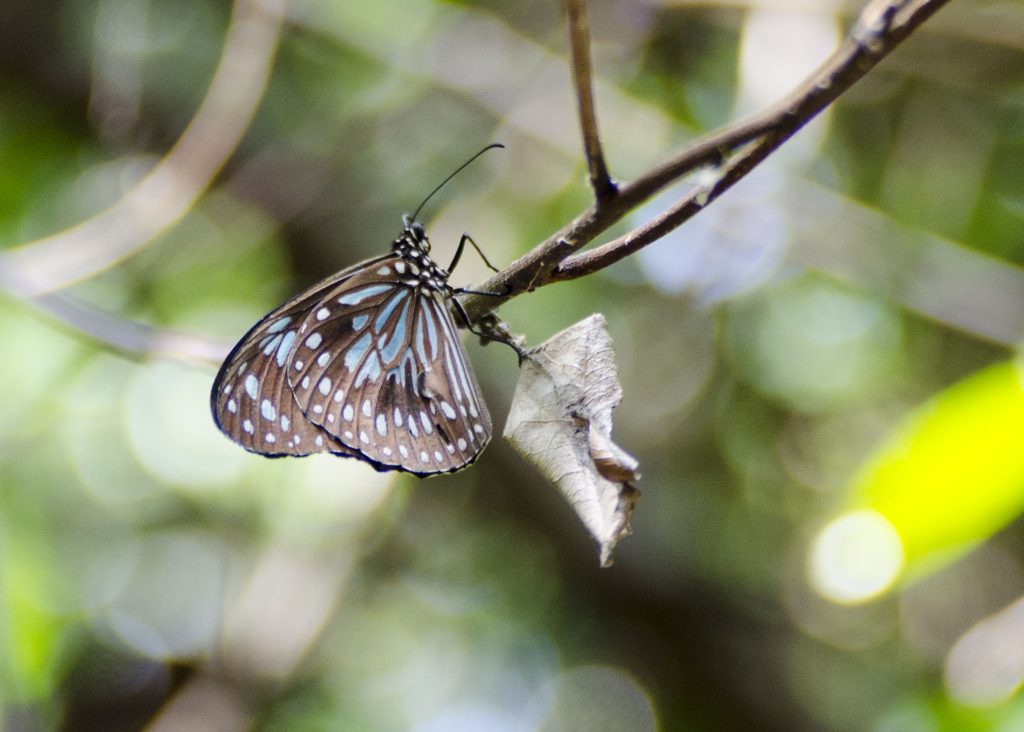 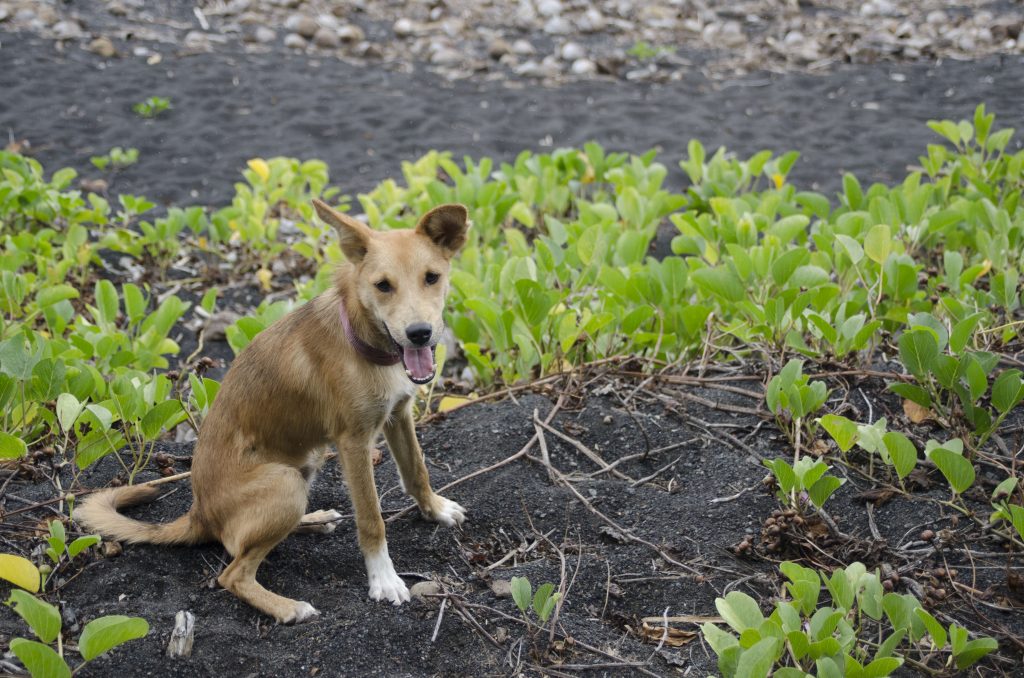 We named him Flea for obvious reasons. He followed us everywhere and was even prepared to jump in the dinghy with us. From the boat we could see him trying to swim towards us and  made it half way before giving up. He then started barking and pacing back and forth on the shore for a long time (Mel’s offering of cookies may have something to do with Flea’s persistence)

It was a hot and humid stroll around village and we were starting to second guess our ability to do the walk. We  came across a cozy, little Cava bar where we could celebrate our success. 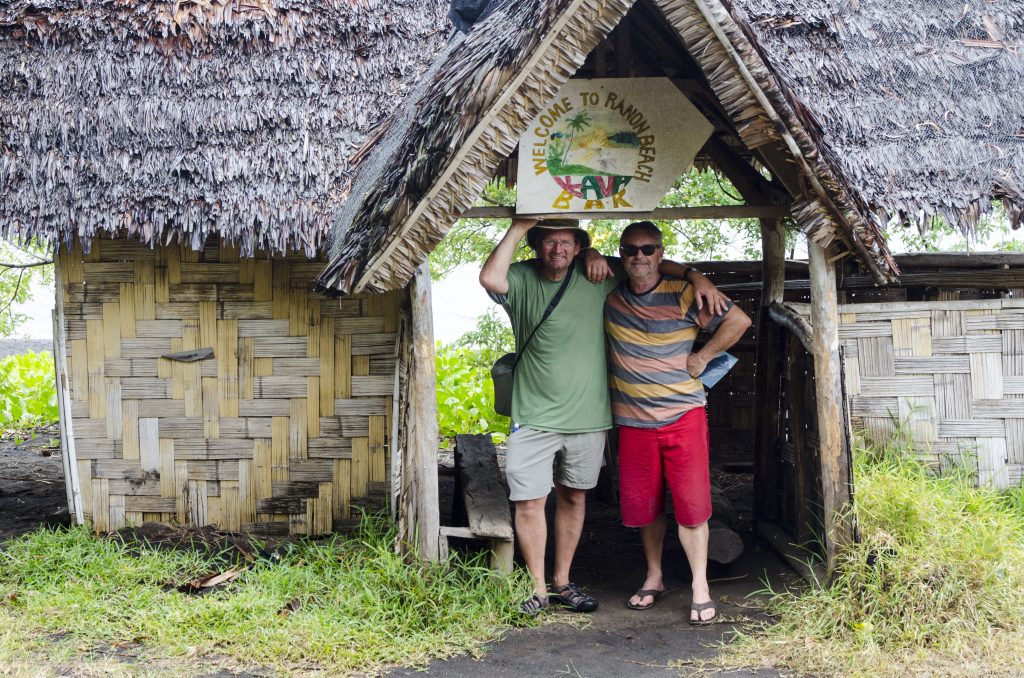 We found somebody who had the experience and knowledge and willing to take us to the volcano Caldera but the weather wasn’t cooperating. There were low lying clouds and it was coming from the wrong direction which would probably hinder our view of the lava lake in the crater once we reached the top. 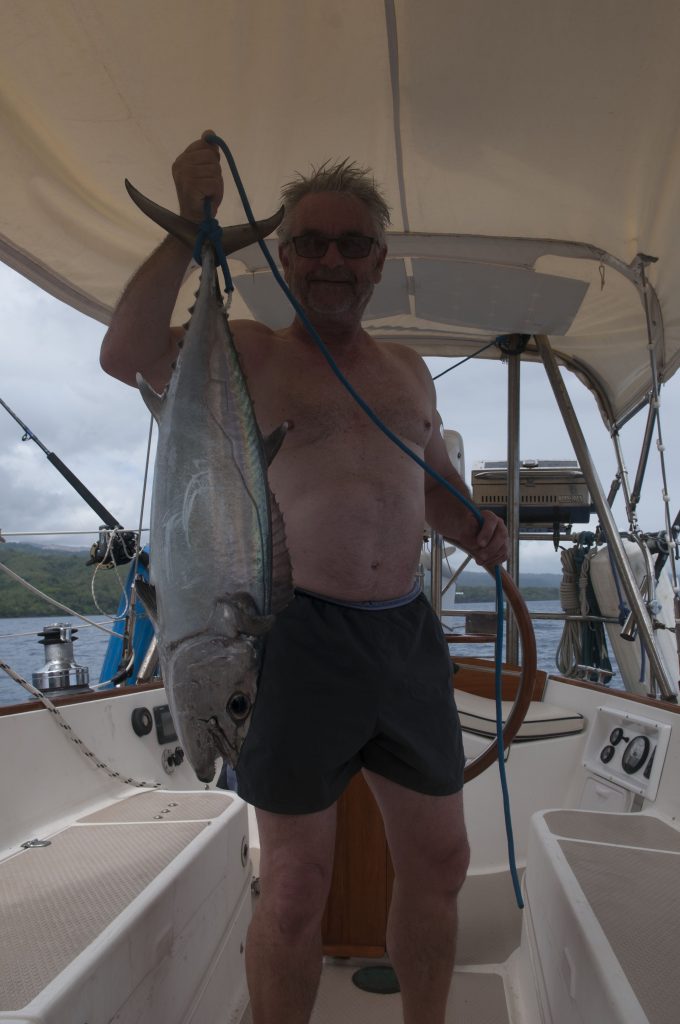 We weren’t willing to do the hike without being able to actually see the volcano. We waited for a day but weather wasn’t improving nor did it look good for the next couple of days. However, it was a  good sail (motor) window to head back South to the main Island, Efate. There were no available flights from Ambrym to the main Island that Pete and Mel could take in order to catch their connection to NZ so we decided to abandon the Ambrym hike. We hope to come back someday and do it. The night before we left we did see some Dugong swim by the boat and on the day we left Pete, who was in charge of fishing, caught us an Albacore Tuna so we were happy with that. The passage back to the main island Efate was an overnight motor but that was better than a beat against prevailing wind. 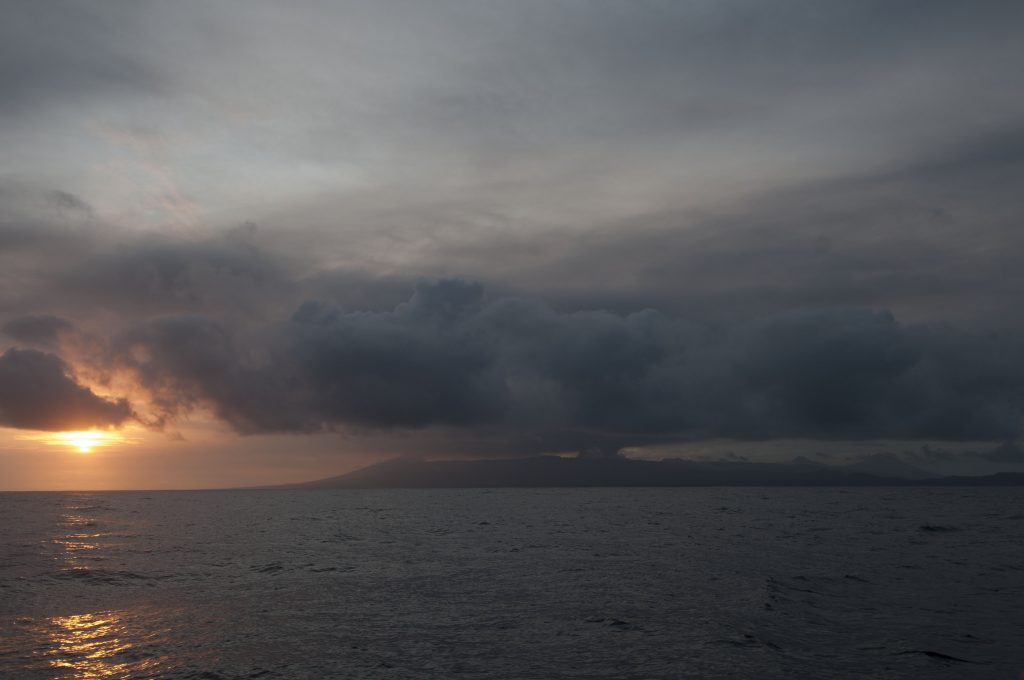 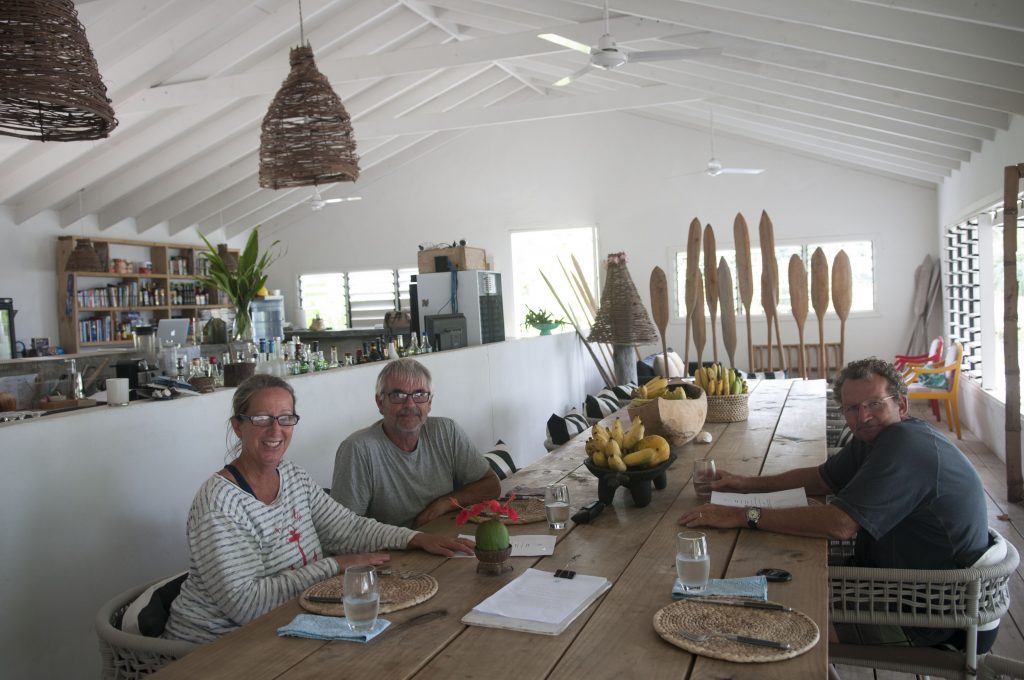 and resorts. Pete and Mel had friends that had a little cottage near where we were anchored so they were able to get off the boat for a little while. I did end up with a very nasty infection from a small cut on my ankle that appeared to be nothing at first. The cut became swollen, red and from there the symptoms worsened and I had fever and chills. It was going to be a hospital emergency stop for me but luckily Pete and Mel’s friends had the proper ointment and antibiotics and by morning I was cured. But it does stress the importance of keeping small cuts clean and having appropriate medication for these instances. The outcome could have been very bad for me if appropriate action wasn’t taken quickly.

We enjoyed our time with our friends and 12 days seemed to go very fast. They were back to NZ and it was time for us to head to New Caledonia with one stop on the way, our last chance to see an active volcano in Tanna.