After spending a little over a week in Vuda Point Marina we started to make our way to Savusavu where Becky, Dennis’ daughter, would be arriving after a long flight from Minneapolis. Savusavu seemed to provide a better tack for sailing to Fulaga, a must see for us before leaving Fiji. We decided to make a stop in Makogai and Namena on the way to Savusavu. I will say that Makogai is a fairly deep anchorage, i.e. 80 feet of water and not great holding. 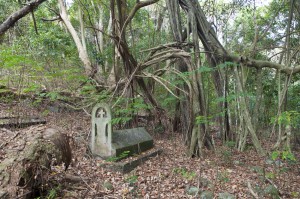 Makogai is a beautiful little island that is rich in history. It was a successful leprosarium from 1911 to 1969 with 4,185 patients landing and 2,300 returned to full health. It closed after Dapsone, a  sulpha drug, was discovered as a cure for leprosy and patients were finally effectively treated and released. 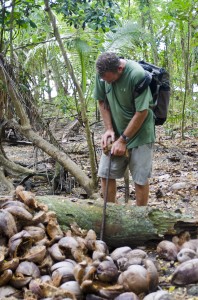 We learned that not only were the lepers segregated to the island of Makogai but they were then further segregated to separate villages for Fijians, Indians and other Pacific Islanders and then segregated again to separate dorms for the women and for the men. We also learned that sex among the patients was  not allowed and it was an offense that resulted in prison incarceration.  After completing the required ‘quicky’ sevusevu we toured the island and explored many of the ruins. I was expecting to have a gloomy feeling as I thought about the people that were sent here with no hope in the future of being re-united with their families and the imminent life of pain, disfigurement and loneliness. I was however surprised by the extent of the infrastructure based on the

ruins that were left and we realized that people here were well taken care of and the town included schools, hospitals, churches and even a movie theatre. Catholic nuns from France also lived in Makogai and they looked after the people physically, emotionally and spiritually. In one of the ruins Dennis found a little bronze lock still attached to a door and he managed to pry it loose and take it back to the boat. It will be a fixture in a future home.

In 2011, Makogai officially became a Mariculture Centre. As per information I obtained from the Fiji website:

“One of the main projects that the team of fisheries officers based here work on, is culturing giant clams (Tridacna). Once in abundance on Fiji’s reefs, many species have been overharvested and current levels are low. The adductor muscle is considered a delicacy and an aphrodisiac in China, which coupled with the harvesting of clams for food, shells and the aquarium trade – it is unsurprising that they have found themselves on the IUCN’s vulnerable list. In the 1980s an Australian-funded project began culturing them at Makogai – and thousands have since been transplanted to various parts of Fiji”

It was interesting to walk through the primitive tanks were the baby clams and turtles were being nurtured to maturity. I also saw many turtles and large clams during a snorkel swim close to the boat. 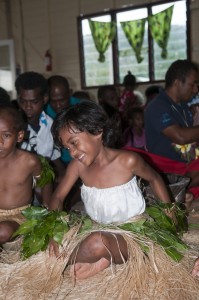 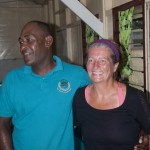 During our stay , a ‘Dive Specific’ cruise ship with about 20 people stopped in for a day and this gave the little village on the other side of the island an opportunity to provide the tourists with entertainment. They organized a Meke and we were invited to attend. It was an evening of Kava drinking, children doing traditional dancing dressed in colorful costumes to acoustic, rhythmic music sung by their parents. Once the children were finished with their show then the music continued and the locals took turns dancing with us.  It was our first Meka in Fiji and we never expected that in Makogai. In appreciation, the tourists donated about $400 for the school. 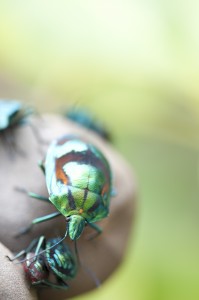 We did a 10 km walk to the village on the other side of the island. We stopped on the way and had some fun with the camera taking pictures of bugs, frogs and any other wildlife we came across. At the village we visited the school. It was well maintained and had a very nice library with a large supply of children’s books all in English. I was intrigued by the notice on the bulletin board which outlined the Do’s and Don’ts. I included the picture and it is worthwhile to enlarge it and read the “Do’s, Don’ts, Should, Report and Watch Out” postings to get an appreciation of the expectations of the kids and teachers.

On our return hike we met a woman sitting on the path with a machete in her hand looking a little lost and forlorn. Dennis of course sat next to her and asked if everything was ok. She started to cry and explained that she had to hide from her husband so that he would not beat her and that she would go home in a little while after he calmed down. She indicated that she had family on the other side of the island but we got the feeling that she considered this as part of life, it was her problem to deal with and her family would expect her to deal with it. We sat with her for a while and then had to leave as it was only an hour from sunset and we still had a 10k hike back. We gave her  a box of tea bags and a box of cookies that I had in my pack for return gifts when people gave us free fruit, etc. It was a little something that made her smile, if only for a minute. It left me sad and powerless to help.

The visit to the school and the encounter with the local lady gave us a new awareness of the Fijian culture, the good and the bad.